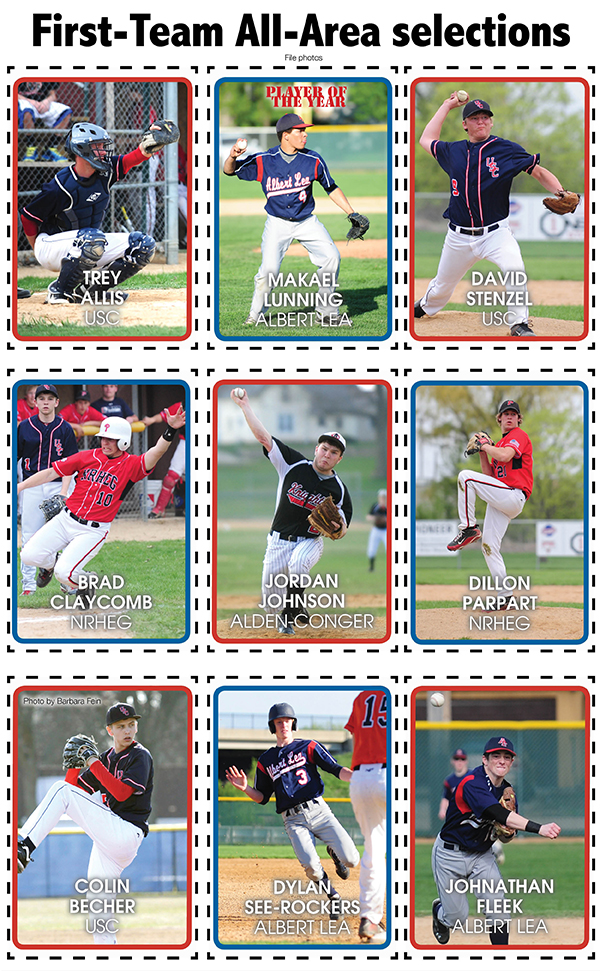 Makael Lunning led Albert Lea and the entire area at the plate with a .423 batting average. He also led the Tigers with 15 runs scored, three triples, 13 stolen bases, an on-base percentage of .583 and a slugging percentage of .673. Lunning also tied Derek Burkard with a team-high 12 RBIs and Wyatt Paulsen with a team-high two home runs.

Trey Allis had a consistent year at catcher and hitting the ball. He threw out  21 of 34 base runners who attempted to steal, and his batting average was .404. Allis, a three-year starter at catcher and an Academic All-State selection, will attend Itasca Community College in Grand Rapids where he will continue his baseball career.

David Stenzel led the area’s pitchers with a record of 6-2 and an earned-run average of 2.1. He also excelled at the plate with a .385 batting average. The third-year starter had 18 RBIs and six doubles this season.

Brad Claycomb led the Panthers at the plate with a batting average of .410. He scored 11 runs on 16 hits. Claycomb was an active base-runner, and he tied teammate Nic Mangskau with a team-high seven stolen bases and eight walks. Claycomb drove in seven runs on the season.

Jordan Johnson was the backbone of the Knights’ lineup this season with a batting average of .385. He only struck out once this year. Alden-Conger head coach Sam Hintz said Johnson was a well-rounded player who was a two-time All-Conference selection.

Dillon Parpart earned a batting average of .390, and he was 2-1 in 20 1/3 innings on the mound. Parpart struck out 16 batters and walked 12. He totaled six stolen bases on the season and tied four other Panthers with a team-high two doubles.

Colin Becher was a clutch hitter for the Rebels. He made three game-winning hits to go along with a .385 batting average. Becher was also perfect in his two games at pitcher. In 40 at-bats, he only struck out twice.

Johnathan Fleek was Albert Lea’s sure-handed shortstop. Fleek scored  14 runs on 19 hits. His batting average was .302, his on-base percentage was .380, and his slugging percentage was .349. Fleek drove in four runs, he stole 11 bases and hit one double and one triple.

Nic Mangskau was 3-4 from the mound. In 40 innings, he retired 41 batters, walked 19 and gave up 18 earned runs. At the plate, Mangskau scored six runs on 12 hits with a batting average of .273. He tied Claycomb with a team-high seven stolen bases.

Walker Linde, a three-year varsity starter, hit .305 and had a solid year at shortstop. Linde led the Rebels with a .675 on-base percentage, and he was walked 16 times as the lead-off hitter. Linde totaled 13 stolen bases and scored 18 runs.

Lucas George earned a batting average of .320 with a team-high eight doubles. The three-year varsity starter knocked in 13 runs and was 1-2 from the mound.

Shawn Redman was 1-0 with two saves as a pitcher. He was a two-time All-Conference selection. Redman earned a batting average of .300.

Ryan McLaughlin earned a batting average of .294 and an on-base percentage of .368. He scored six runs on five hits in 17 at-bats. McLaughlin also tallied three stolen bases on the season.

Zach Bordewick led the Tigers at catcher. He earned 17 hits in 63 at-bats for a .270 batting average. Bordewick drove in seven runs, he hit three doubles and scored five runs. Bordewick’s on-base percentage was .329, and he stole one base during the season.

Lucas Hansen was 2-2 on the mound for the Tigers. In 34 innings of pitching, he struck out 20 batters, walked 19 and gave up 18 earned runs. Hansen’s earned-run average was 3.71. He also hit one home run and stole three bases on the year.

Matt Jensen earned a batting average of .444 in 18 at-bats. The sophomore third baseman scored three runs on eight hits. He also drove in two runs and was walked twice.