Albert Lea Tribune Publisher Scott Schmeltzer will move next week to Sturgeon Bay, Wis., where he will operate the Door County Advocate and several other publications.

Schmeltzer’s successor is expected to be announced soon. 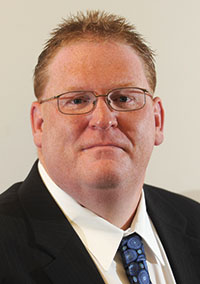 The move will get Schmeltzer, 44, closer to Marquette, Mich., where he grew up and where his mother, brothers and sisters live. The family connection was a major factor in his decision, Schmeltzer said.

“There are not too many things that would make me want to move. We have an awesome team and so many friends here in Albert Lea,” he said.

Sturgeon Bay is also close to Schmeltzer’s favorite football team, the Green Bay Packers. “It sure didn’t hurt. Let’s say that,” he said.

Schmeltzer, who has been the Tribune’s publisher since 2003, said he will miss the community’s ability to band together for good causes, whether the United Way, Relay for Life or medical fundraisers, He said he will never forget the way Albert Lea neighbors helped one another after devastating tornadoes in June 2010.

The Tribune has made several changes since 2003. It now has its own press, has branched into magazine publishing with Albert Lea Magazine, and has become the community’s leader in digital news, with 24/7 website updates, Twitter feeds and more than 3,000 Facebook friends.

Although the Tribune has collected many industry honors under his leadership, Schmeltzer said he is proudest of a state press association honor for the Tribune’s role in Albert Lea’s AARP/Blue Zones Vitality Project; an effort to rethink the ways the community approaches healthy living. The Tribune was also recognized for sending a reporter to Kuwait in 2011 to cover local National Guard soldiers.

Schmeltzer is on the Minnesota Newspaper Association board, is a member of the Rotary Club and attends St. Theodore Catholic Church. He has served on the United Way of Freeborn County board of directors and Albert Lea-Freeborn County Chamber of Commerce board of directors. He was on a chamber committee that helped launch the Leadership program through Riverland Community College.