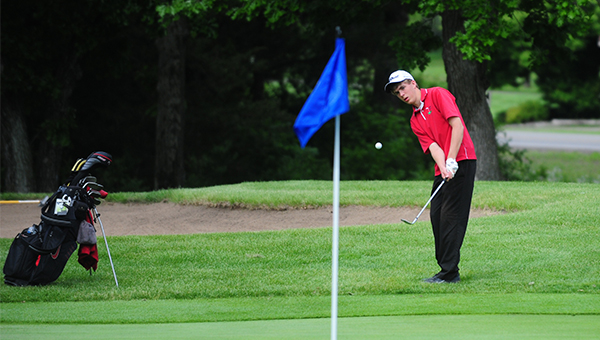 Ryan Pederson, a freshman from United South Central, chips the ball onto the green on the final hole of the front nine Tuesday at Pebble Creek Golf Course in the Class A state golf tourney. — Micah Bader/Albert Lea Tribune

BECKER —The United South Central boys’ and girls’ golf teams are in the middle of the pack Tuesday after Day 1 of the Class A state tournament at Pebble Creek Golf Course.

The Rebel girls finished fourth out of eight teams with a score of 389. 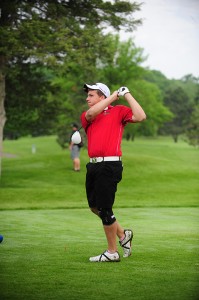 Brett Ulrich, a senior from of United South Central, drives the ball Tuesday on the fifth hole in the Class A state golf tourney. — Micah Bader/Albert Lea Tribune

“We’re only four shots out of third place, and that’s what we’re going to shoot for,” USC head coach Brad Huse said.

Two of the Rebels’ veteran golfers, Ali Wood and Claire Christian, led the team. Both golfers have experience at Pebble Creek at the state level from 2011, Huse said.

Christian, a junior, led USC with a score of 89. She completed the front nine in 41 strokes and the back nine in 48. She is in a four-way tie for 11th place. 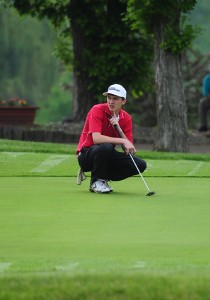 Cobi Bullerman, a senior from of United South Central, takes a look at the green Tuesday at the Class A state golf tourney. — Micah Bader/Albert Lea Tribune

The Rebel boys finished in fifth place in soggy conditions, but they’re primed to make a run for second.

“Realistically, we’re nine shots out of second place,” Huse said. “If we shoot our average (328), we can knock that down. I think our scores will be 10 to 15 strokes better tomorrow.”

Ryan, a freshman, shot a 40 on the front and back nine to tie for 15th place with five other golfers.

Nate, a sophomore, shot an 84 to enter an eight-way tie for 31st place.

Mille Lacs High School has a 20-shot lead on the rest of the field after Day 1 with a score of 310.