Woman has been in philanthropic organization for 50 years

Longtime Albert Lea resident, Hazel Senske, is also a longtime volunteer. Senske volunteers for a variety of organizations. This year, she celebrated 50 years with TTT. 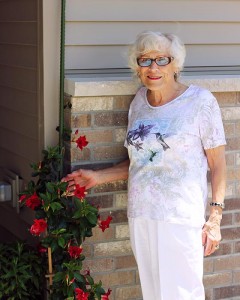 Hazel Senske stands with some of her flowers. The weather has prevent Senske from getting her garden started this year. –Erin Murtaugh/Albert Lea Tribune

TTT is a philanthropic organization which raises money to help send worthy girls to camp in Clear Lake. Senske is a member of the area chapter, MN W. The chapter was founded in 1963 and Senske was one of the charter members. TTT uses Belgium waffle breakfasts, bunco parties, bridge marathons, rummage sales and other events to raise funds for sending area girls to camp each summer.

“We give them our time, talent, and treasure,” Senske said, which is where the tri-T name of the organization comes from.

Senske was an adult leader for the Four Lakes 4-H club and also chaperoned for the scholarship leaderships trips for 13 years. She also had a huge role in reviving the Clover Bud program for younger children interested in 4-H.

When Freeborn County had an active board for the American Cancer Society, Senske was the tobacco chairwoman. Her job was to inform businesses of the effects of tobacco use. If the business agreed to go smoke-free, they were awarded a plaque. Senske is proud of her accomplishments, which led to that state law making all restaurants smoke-free.

Senske also worked as a “spark plug” for the Albert Lea Convention Center. Her job was to welcome tour buses and show them around the area. The tour groups would visit farms, museums, theaters and other attractions. Senske said it was so fun to see people enjoying the area because many visitors came from the Twin Cities area and few had ever seen a farm before.

Senske currently volunteers her time as a member of the Hospital Auxiliary and works in the gift shop. She is also a member of the Shades of Jade Garden Club, which takes care of Higbie Gardens in Shoff Park. The group also works on displays for the Freeborn County Fair and holds an annual plant sale. 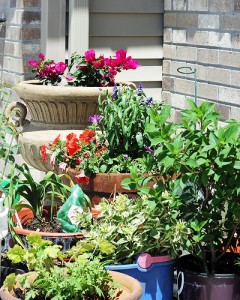 Flowers are lined up outside Hazel Senske’s home on Monday. One of Senske’s hobbies is gardening.

“This year we weren’t able to do the plant sale because of the weather,” said Senske. “We were all disappointed.”

Senske has also been a member of Circle at First Lutheran for 58 years. She was president of the women’s organization for two years and is currently a member of the property commission for the church.

“My church is very important to me,” said Senske.

Senske is also a retired Title I instructional aide for the Albert Lea Area Schools. She said she misses working with kids because it is so rewarding. In the fall, Senske hopes to get into more volunteer work with children, such as reading at the public library.

When not volunteering, she can be found traveling, gardening or birdwatching. Her favorite places she has traveled to are New Zealand and Israel.

Potted plants and flowers line Senske’s driveway as she waits for her new patio to be put in so she can start her garden. The weather has delayed construction and Senske is having a hard time waiting to get out and plant her flowers. She looks forward to their installment later this week.