An Albert Lea woman was sentenced to 21 months in prison Thursday for violating her probation from a 2011 conviction.

Bonijean Elizabeth Utley, 24, pleaded guilty earlier this month to stealing a Coach purse from a cart at Nelson’s Market Place. 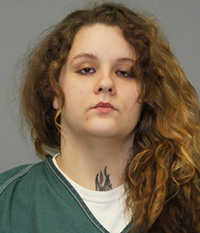 She had been on probation for aiding and abetting third-degree methamphetamine sales to a drug task force informant on Dec. 1, 2009, and had at least two prior probation violations, according to online Freeborn County District Court records.

Court documents state Utley stole the purse on April 8 when she and another woman were shopping at Nelson’s.

The victim told police she had gone through the checkout at about the same time as the two women, and when she loaded her groceries into her vehicle, she had left her purse in the cart. Then she took the cart to a cart corral and left the store parking lot.

She said she noticed the purse was missing when she arrived at home.

Police found the purse at a residence at 212 S. Washington Ave.

In addition to the probation violation, Utley was convicted of a new count of misdemeanor theft tied to this incident and was sentenced to 91 days in jail, to be served concurrently with her prison sentence. She will get credit for 66 days already spent in jail.

In the meth case, Utley reportedly assisted in selling 0.3 grams of the drug.