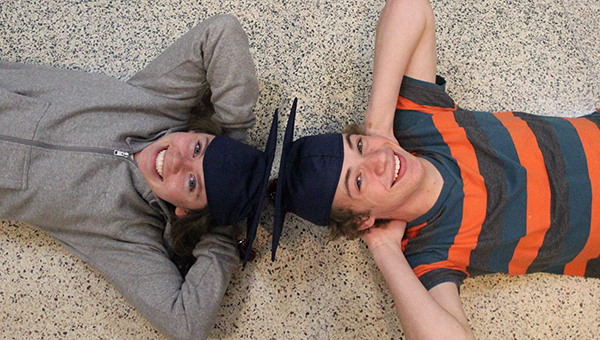 Two seniors are tasked with wrapping up their years of education and inspiring their classmates during Friday’s commencement ceremony at Albert Lea High School.

Those seniors are Kelli Sanderson and Andy Ehrhardt. They found out last week that their classmates had voted for them to speak at their graduation ceremony.

“I was definitely surprised when I heard other names people were voting for,” Sanderson said.

Ehrhardt was also surprised and thought people only knew him for an obscure reason.

The two said they’ve been working on their speech and hope to include memories from elementary school all the way up to their senior year. Commencement begins at 7 p.m. Friday in the gym at Albert Lea High School.

Read on to learn more about the grad speakers:

Sanderson lives in Albert Lea with parents Dave and Sue. She is the youngest of three siblings, which include sisters Jessica and Kristin. She attended Halverson Elementary School.

Sanderson has been involved in track and field, choir, show choir, chorale, Student Council, Link Crew and jazz band. Her favorite classes at ALHS were Kevin Gentz’s health classes. She nannies in her spare time.

“I also like playing sports with my friends,” Sanderson said.

She’s a small group leader and a member of the worship team at Crossroads Church. And, at Tuesday’s senior breakfast, she got the Best Role Model and Most Likely to Volunteer awards.

Sanderson plans to attend North Central University in Minneapolis this fall. She would like to study psychology then go to grad school to focus on child psychology.

Ehrhardt is an only child who lives in Albert Lea with parents Tom and Sally. He attended Lakeview Elementary School.

At ALHS he sang in choir and show choir, performed in musicals, was a master of ceremonies at Tigers Roar this year and used to be in soccer and swimming. His favorite class was Media Studies with teacher Neil Skaar, where he said he enjoyed watching old movies and hearing Skaar’s explanations about the films.

“I also started a philosophy club this year,” Ehrhardt said.

When not at school Ehrhardt likes to hang out with friends, play games on his computer and read. His favorite books are those in the “Eragon” series. At the senior breakfast Ehrhardt was voted Best Actor.

Ehrhardt is planning to go to Gustavus Adolphus College to study psychology, a subject that has always been of interest to him.