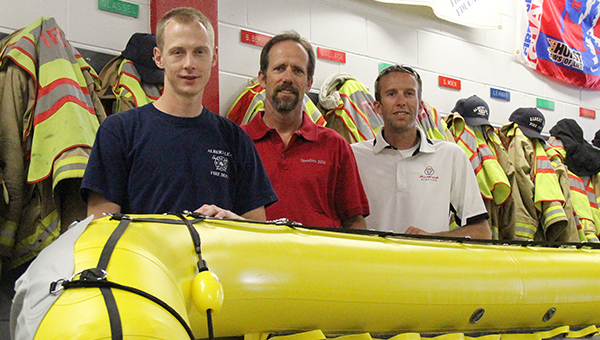 A large donation has helped the Albert Lea Fire Department purchase a boat that could make ice water rescues easier.

Firefighter Brett Boss has applied for grants from Alliance Pipeline before, and Wayne Rankin, a technician with the company, said people have to submit proposals for what the funds would be used for. Another Alliance Pipeline technician, Jared Smith, said the company likes to fund important projects locally.

“We like to invest in the community,” Smith said.

Boss said he has also applied for and received grants to help pay for new radio equipment and for large air bags that can lift cars and other equipment. 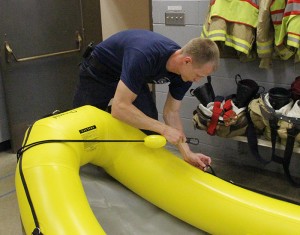 “You have to have a project in mind,” Boss said. “This was in the city budget but we waited to buy it to see if we got the grant.”

In his most recent application, Boss asked for $5,000 to cover the cost of a new water rescue boat. He found out the application was approved, and bought the boat from Oceanid. It arrived in Albert Lea a little over a week ago.

“It’s been on our wish list for a while,” Boss said. “It’s multi-use, you could buy a motor, or pull it behind a boat or Jet Ski.” 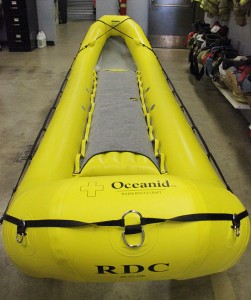 The new boat will work better in some situations than the one the Fire Department currently uses. The Zodiac boat the firefighters have been using is much larger and heavier. It has a motor, and Boss said it takes five people to operate it during a rescue.

Other things on the fire department’s wish list include new water rescue rope and continuing to upgrade equipment. The new Oceanid boat weighs just 50 pounds and can be carried by two people, or dragged across ice by just one person. It also inflates in 45 seconds using the tanks of air the department already has on hand.

“It’s meant for ice rescue,” Boss said. “You can walk across the platform, pull the victim up through the hole and lay them down, then walk back.”

Before when they would rescue anyone the person would have to walk or be carried back to the shore. With this new boat a person could lay on its inner platform while the firefighter drags the boat back to land. 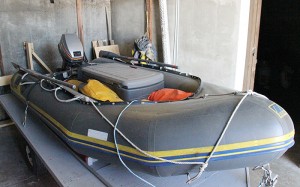 The Albert Lea Fire Department has used this boat for ice water rescues in the past. It does take four or five people to use, so firefighter Brett Boss said the new boat will be easier to use in certain instances.

“The Fire Department houses and maintains that boat,” Boss said.

Boss said he wants to meet with the county fire association to let them know the boat is available for lakes outside of Albert Lea, too. And it can be pulled behind a snowmobile or all-terrain vehicle if the right hookup is purchased. While the Albert Lea Fire Department doesn’t own any snowmobiles, Boss knows some of the rural fire departments do.