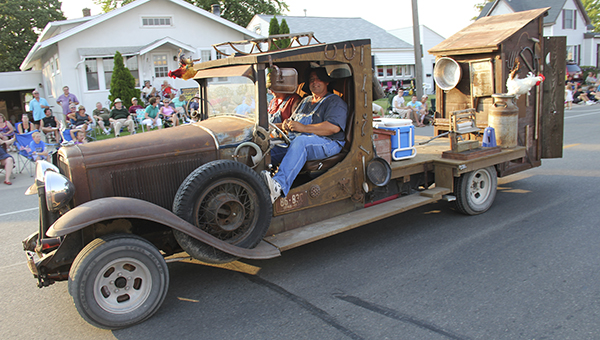 Two Shriners ride in a rusty 1931 Buick with an outhouse on the back in the 2012 Third of July Parade through downtown Albert Lea. –Tim Engstrom/Albert Lea Tribune

Albert Lea’s Fourth of July festivities will include a little something for everyone.

Events kick off with the annual Third of July Parade, with floats lining up at 5 p.m. at the Freeborn County Fairgrounds.

The parade itself is scheduled to begin at 6 p.m.

The parade starts at the fairgrounds, travels down Bridge Avenue, turns west onto Fountain Street and ends at Central Park. Work scheduled on Fountain Street at the intersection of Broadway is slated to be completed in time for the event. 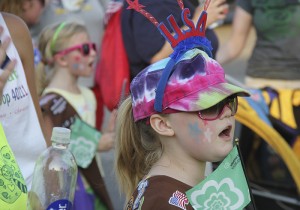 Magan Raatz, 8, sings a chant with the local Girl Scouts as part of the Third of July Parade. The parade theme in 2012 was “Celebrate Our Armed Forces.”

Albert Lea-Freeborn County Chamber of Commerce Executive Director Randy Kehr said Albert Lea High School is slated to have a full band in the parade this year, instead of just the drum line.

Merriam’s Midway Carnival will not be set up as in previous years because of a scheduling conflict.

On the Fourth of July, the Bayside Ski Club will present its ski show at 2 p.m. with a pre-show at 1:30 p.m. This year’s theme is “Mario and his friends meet Bayside.”

Snacks and beverages will be available for purchase at each show.

Attendants are asked to bring their own chair or blanket and sunglasses.

The show is free to the public, but donations are accepted. 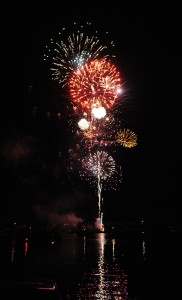 Several fireworks go off in the sky above Fountain Lake during the finale of the Fourth of July Fireworks in Albert Lea in 2012. –Danielle Boss/Albert Lea Tribune

The Albert Lea Convention and Visitors Bureau, the Leo Carey Post of the American Legion and the Old Car Co. will host the fourth-annual classic car show from 4 to 7 p.m. on Broadway Avenue from Fountain Street to Clark Street. First-, second- and third-place People’s Choice Awards will be handed out.

At about 8 p.m., the Albert Lea Community Band will assemble at the Fountain Lake Park gazebo to perform music for community members at the park.

Fireworks will follow from City Beach at dusk, usually around 10 p.m.

People can also view the fireworks from Albert Lea Lake during a pizza cruise on the Pelican Breeze II.

“There’s so many events that are coming to town this summer, and we really encourage everyone to bring family and friends to the events,” said Susie Petersen, executive director of the Albert Lea Convention and Visitors Bureau. “These are events for the whole family, and they add to the quality of life in our town.”