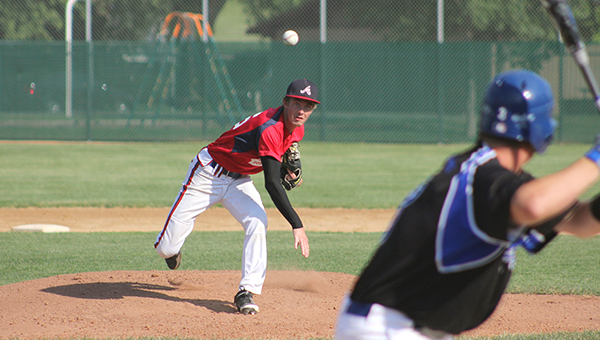 Marcus Stoulil of Albert Lea/Austin hurls the ball toward home plate Monday in Game 1 of a doubleheader against Owatonna. Stoulil went the distance on the mound. He struck out three batters and allowed four walks. — Micah Bader/Albert Lea Tribune

Albert Lea/Austin used a four-run burst in the second inning of the first game to win 8-3, and Owatonna withstood an 11-run 5th inning by Posts 56 and 91 to win the nightcap 17-11. 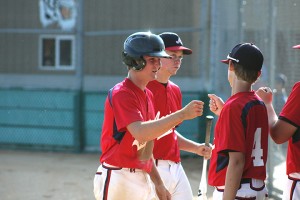 Albert Lea/Austin catcher Gabe Kasak is welcomed back to the dugout by Jake Thomas, left, and Tyler Pirsig. Kasak scored a run Monday against Owatonna in the bottom of the third inning of Game 1. — Micah Bader/Albert Lea Tribune

Marcus Stoulil started on the mound for Albert Lea/Austin in Game 1. He made quick work of the Post 77 batters: three up and three down in the top of the first.

In the bottom of the inning, Posts 56 and 91 stranded two runners. However, Albert Lea/Austin lit up the scoreboard in the second inning with a one-out RBI by E.J. Thomas to score Jacob Kempen. Steve Clennon scored on an Owatonna throwing error, a hit by Marcus Stoulil scored Thomas and Dylan See-Rockers crossed home plate to give Albert Lea/Austin a 4-0 lead.

Posts 56 and 91 extended their lead to five runs in the third when Gabe Kasak scored on a first-base overthrow.

Owatonna threatened in the top of the fourth, but a diving grab for the final out by Dylan See-Rockers in deep left center field thwarted any chance Post 77 had to score.

Albert Lea/Austin pulled away in the sixth inning. A hit to right field by Kasak scored Johnathan Fleek, and Kasak and Stoulil scored on a hit by Ethan Horstmann to extend the lead to six runs (8-2). 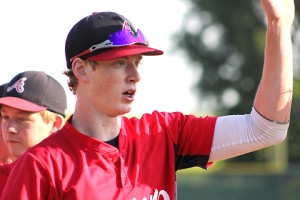 Dylan See-Rockers of Albert Lea/Austin is congratulated by his teammates Monday after making a diving grab in the outfield to get the final out in the top of the fourth inning during Game 1 of a doubleheader against Owatonna. — Micah Bader/Albert Lea Tribune

Stoulil helped Posts 56 and 91 maintain the lead for the final two innings.

“In the very first game I pitched here, Jay (Enderson) told me to pitch for outs,” Stoulil said. “That’s what I’ve been doing, and it’s really nice to get out there knowing that you’ve got people behind you making plays.”

In the nightcap, Albert Lea/Austin started slow. Owatonna built a 10-0 lead through the top of the fifth. However, Posts 56 and 91 rallied to not only tie the game in the bottom of the fifth, but take the lead.

“You don’t see that in most lifetimes,” Enderson said. “Being down 10 to nothing, you think you’re ready to go home. Then you score 11? That was fantastic. We could have easily cashed it in, but we didn’t.”

Stoulil hit a three-RBI double early in the inning to get the rally going.

“It was great to get the huge comeback,” Stoulil said. “Everybody contributed — one through nine — and everyone on the bench.”

However, Owatonna responded with six runs in the sixth inning to pull away and earn the win.

Next, Albert Lea/Austin plays a doubleheader at Rochester Mayo. The opening pitch of Game 1 will be at 4 p.m. today.