A North Dakota boy and his Albert Lea grandmother have reached their goal of collecting 1 million pop tabs to benefit a Ronald McDonald House in St. Paul.

In fact, they exceeded it.

After tallying all the tabs, Hunter Kreutzbender, 9, and his grandmother Jeannie Jackson collected 1.2 million tabs, which equaled out to $381 in donations. 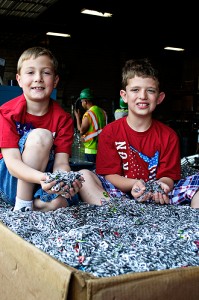 Hunter Kreutzbender, right, and his brother, Kyle, pose for a photograph with a large pile of pop tabs on June 20 before the money from the tabs was donated to The Ronald McDonald House. –Photo courtesy Natasha Clarey Photography

“He was excited,” said Hunter’s mother, Amanda, on Tuesday.

She said all of the tabs filled up an entire minivan from floor to ceiling with the seats taken out.

“He said it would help a lot of people and that that was a lot of pop tabs,” Amanda said.

Born with hydrocephalus, Hunter began collecting the tabs with Jackson in February as part of a special project.

He had gone through at least a dozen surgeries, several of them in the last couple years, and came up with the idea to help other people and recycle pop tabs for the Ronald McDonald House.

Hunter visits Gillette Children’s Hospital in St. Paul for his surgeries, and the pop tabs will benefit the Ronald McDonald House near the facility.

While Hunter collected tabs in North Dakota, his grandmother collected them from Albert Lea. Jackson said out of the total, she collected 803,000 tabs, including shipments from Florida, Texas, Colorado, Washington and Idaho, plus donations from local residents.

“It was honestly the neatest experience,” she said.

She said she had people walk up to her in the grocery store asking how the effort was going and others who just walked up to her and gave her tabs. She also heard of a teacher who made it a class project to collect the tabs and a retired nurse who had worked at Gillette Children’s Hospital.

Amanda said Hunter found out he had reached the 1 million goal on May 24, and the tabs were recycled on June 20. 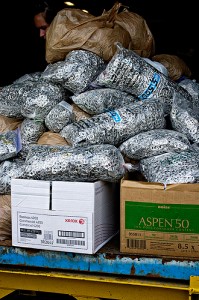 More than 1 million pop tabs sit in a large pile on June 20 before being turned in at a recycling center in St. Paul. The proceeds from the tabs went to benefit The Ronald McDonald House.

“We so appreciate their donations but also the message that it sent Hunter at a time when he was trying to understand why he has to be the one who’s always in the hospital,” Amanda said. “He was able to come to terms with this and have a positive light.”

Jackson said the project renewed her faith in the younger generation.

“In a world that can sometimes be a real cynical world, it was rejuvenating on how many positive people there are that are willing to help,” she said.

Jackson said Hunter has already moved on to a new project — collecting toys for children who will be in the hospital on Christmas.

If anyone has any additional pop tabs that they would like to get rid of through the end of the year, she will continue collecting them.