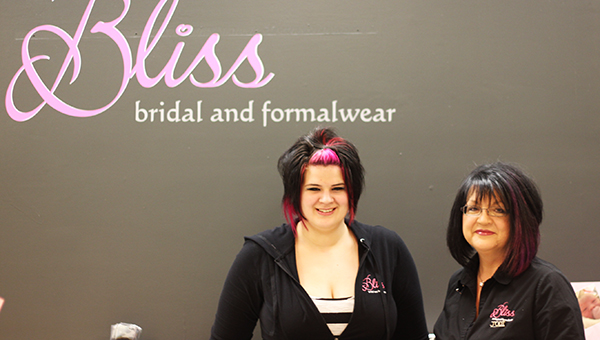 By Erin Murtaugh, staff intern
Prom season took an unexpected turn in Albert Lea this year. With the addition of Bliss Bridal and Formalwear to Northbridge Mall, prom-goers had another option.

Bliss opened on March 16, just a little more than a month before area schools’ proms. The store sells prom dresses and rents tuxedos. Aside from prom necessities, the store also offers bridal and formalwear. The store has party wear, flower girl dresses, accessories and shoes, too.

“We have every little thing for your wedding,” said Jody Degen, owner of Bliss.

Bliss has two store locations, one in Albert Lea and one in Mason City. The Mason City location opened in 2011. Bliss is a family-owned business, ran by the Degens. 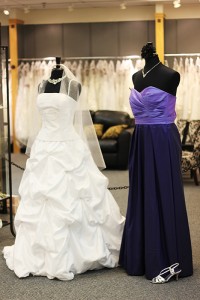 A bridal gown and bridesmaid dress are a couple of the many items on display at Bliss.

When Christopher-Banks closed in Northbridge Mall, a door opened for the family.

“We thought it would be a good opportunity to expand,” Degen said.

Aside from a location for the store to open, the Degens saw other advantages to opening a second location. Since the other Bliss is located in Iowa, the sales tax line is helpful to drawing customers into Minnesota. With the recent closure of Courtly Manor, Albert Lea was also lacking a bridal shop. Bliss saw many customers coming from the southern Minnesota area, which was another reason to open a second location.

“The easier for them, the better,” said daughter Natalie Degen, who also manages the Albert Lea store.

Bliss is not just a pop-up store. The family plans to stay open in the mall.

“We’re just a small family business,” Jody said. “We hope to spice it up a little.” 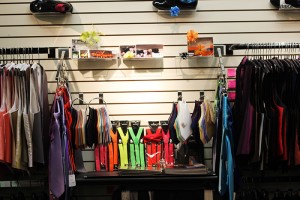 Tuxedo parts line a wall at Bliss. Tuxedo rental is offered at the store.

The store currently has four employees. Bliss is open from noon to 6 p.m. Mondays, Wednesdays and Fridays, noon to 8 p.m. on Tuesdays and Thursdays, from 10 a.m. to 4 p.m. Saturdays and from noon to 4 p.m. on Sundays.

The Albert Lea location welcomes walk ins. Jody said it can be compared to TLC’s TV show, “I Found the Gown,” where customers can come in and find what they’re looking for on the spot. The Mason City location can be compared to the TV show, “Say Yes to the Dress.” Brides can search for the perfect gown by appointment only.

Though there are only two locations right now, expanding the business is possible.

“It’s always in the back of her mind,” Natalie said of her mother.