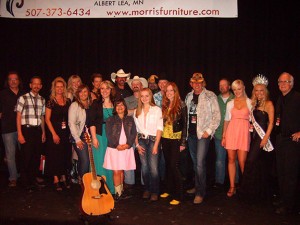 On Aug. 24 at the Northern Lights Casino in Walker, Lawless will advance to the state final of the Texaco Country Showdown vying for $1,000 and the opportunity to perform at one of five regional competitions in the fall. Regional winners receive an all-expense paid trip to the national final, exuding talent and energy in their performances to compete for the $100,000 grand prize and the national title.

All contestants and judges were awarded with a KQAQ & Texaco Country T-shirt along with a variety of tickets to Noah’s Ark Water Park, Adventureland, Chanhassen Dinner Theatre, MOA Family Fun packs and Minnesota Zoo all compliments of KQAQ.