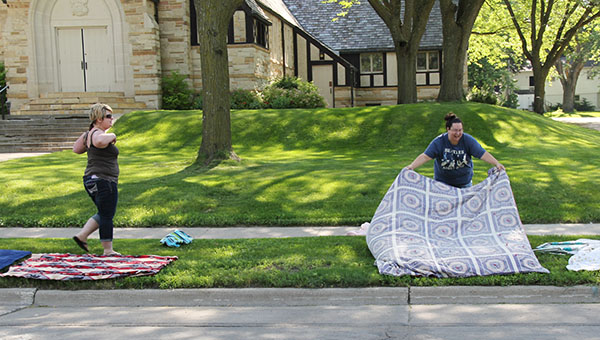 When is the right time to reserve a spot for the big parade?

Heidi McGill and her son, 5-year-old Sam, set out blankets and chairs Tuesday morning on Bridge Avenue across from Zion Lutheran Church. They were among many Albert Leans who like to reserve front-row seats for the Third of July Parade.

Thus begins the annual debate among locals: How soon is too soon to set out chairs? 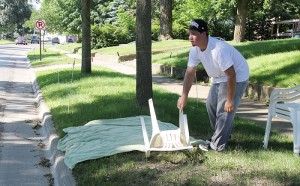 Esteban Torres of Elizabeth Avenue sets out patio chairs Tuesday on Bridge Avenue. Behind him is an area cordoned off with strings. — Tim Engstrom/Albert Lea Tribune

As of 10 a.m. Tuesday — 20 hours before the start — there were 71 reservations along the parade route. A reservation was counted as what appeared to be one family’s spot, saved through a grouping of chairs, a stringed-off area, a lone blanket or grouping of blankets or even a tarp.

Seventy were on Bridge Avenue. One was on Fountain Street. None was on St. Mary’s Avenue. By 7 a.m. today — 11 hours before the start — there were too many to count. Chairs and blankets lined Bridge and the first part of Fountain.

“People say the ones who set chairs out early are crazy,” McGill said. “I think they’re crazy, too, but I’m one of them.”

She said she liked being across from Zion because it is shady and near the beginning, which allows them to leave earlier. Sam said he thinks there is more candy near the start. 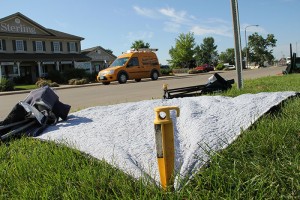 The parade starts at the Freeborn County Fairgrounds, heads south on Bridge Avenue, turns west on Fountain Street, then south on St. Mary’s Avenue to end at Central Park. The parade, organized annually by the Albert Lea-Freeborn County Chamber of Commerce, begins at 6 p.m. The grand marshal this year is former Tribune writer and local historian Ed Shannon.

McGill said she once was a victim of theft. She showed up to her reservation two years ago to find that her blanket and one chair had been tossed into a yard and another chair was missing altogether.

“Most people respect stuff,” she said.

There appears to be four methods for making reservations:

• String off a section of boulevard, that space between the sidewalk and curb.

• Align folding chairs along the curb.

• Place down one or more blankets, sometimes with chairs on top.

• Stake down a tarp. 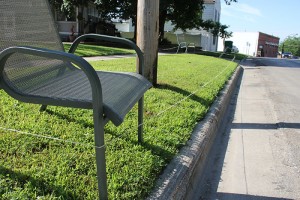 Steph Anderson of 610 Bridge Ave. uses strings tied to chairs to reserve the curb space in front of her house in preparation for the Third of July Parade. — Tim Engstrom/Albert Lea Tribune

Tara Luna was showing her sister, first-timer Theresa Sullivan, how to do the blanket method on Tuesday morning on Bridge Avenue in front of Zion Lutheran.

“If you don’t close the gaps, people will sit in between your stuff,” she said.

Why do people horn in on reserved seating? Luna speculated that they didn’t have an intent to be mean but were merely late-comers desperate to get a good view. That, she said, is why it is wise to save a place. She said she doesn’t set out blankets until she sees that other people have saved spots. About 20 or 30 family members will sit on her blankets and curtains.

The string method tends to be used by property owners, said Randy Kehr, director of the chamber, and the chairs and blankets are everyday citizens who want a specific spot.

Generally, people are respectful and don’t steal or move the possessions.

“It’s very heartening for the chamber staff to know people are putting things out two or three days before the parade,” Kehr said.

Steph Anderson of 610 Bridge Ave ties strings to chairs each year to save space for about 50 family members and friends who view the parade from her lawn. She said having a spot is a good reward for maintaining the boulevard and living right on busy Bridge Avenue.

The earliest that people set out place-savers this year was Monday evening, two days before. Edward Lucas of 811 Bridge Ave. said usually they begin three days before the parade.

He didn’t know why, but he said the number of reservations for one day before seemed down. He speculated the construction on Broadway and Fountain Street might have deterred some early space savers.

Lucas has part of his lawn saved and said he is happy to share the rest with strangers.

“If you decide you want to sit under the tree, go for it. We’re just having fun,” he said.

Estaban Torres saved a spot under a shade tree on Bridge Avenue with a blanket and four upside-down white patio chairs. He and his wife plan to sit in the chairs, their two children on the blanket and two friends in the other chairs.

Kehr said he said he understands why people want to make reservations. They want to maximize the parade experience. It’s hard for children, he said, to have the same fun two or three rows back.

He said he wouldn’t be surprised if there were no front row spots available Wednesday morning, not counting driveways and parking lots. That said, once people get seated, they tend to take up less space than they reserved. Late-comers can find locations.

“There is always room to squeeze a few more,” Kehr said.