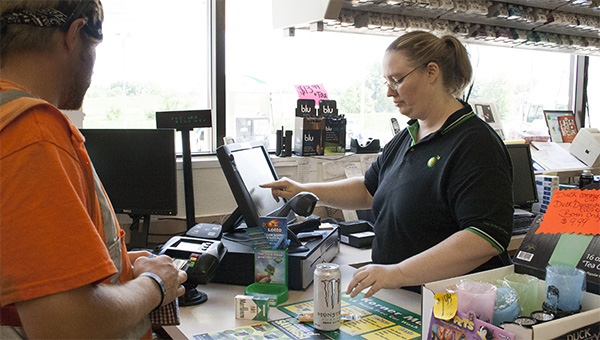 Area residents are giving mixed opinions on how a new law raising the cigarette tax by $1.60 per pack will affect their habits.

While some have said the tax increase — which goes into effect today — will motivate them to quit smoking, others have said it will not have any impact and it could instead drive people out of the state to purchase their cigarettes.

“I have been hearing people say they’ll go to Iowa to buy them,” said Brenda Ravlin, a clerk at the Korner Mart on Front Street.

Ravlin received a shipment of cigarettes Friday morning at the gas station and was pulling out old packs to replace with new ones. She planned to go into work late Sunday night to load and adjust the prices for the increased tax. 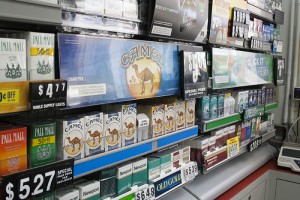 Cigarettes line the back wall of Dash-In Grocery Friday morning.

“I’m glad I don’t have that habit,” she said, noting she hopes the tax will help her husband quit.

According to the Campaign for Tobacco-Free Kids and the American Cancer Society Cancer Action Network, raising the per-pack price by $1.60 will prevent more than 47,700 kids from becoming adult smokers and help more than 36,000 current smokers to quit across the state.

The price increase will also save Minnesotans more than $1.65 million in long-term health care costs and prevent more than 25,700 premature smoking-related deaths, according to a news release.

“We know that a majority of smokers want to quit, and now they have an opportunity to save more money and protect their health by quitting,” said David Willoughby, CEO of ClearWay Minnesota, a nonprofit organization that aims to reduce tobacco use.

Flategraff, who stopped into Korner Mart Friday to buy a pack of cigarettes, said it is her goal to quit smoking starting today.

“I think it could help a lot,” she said of the tax.

Albert Lean Jay Bergland said he has smoked for 25 years, and he has tried multiple times to quit.

This week he has a new incentive with the increased tax and plans to try another time to quit smoking. He is considering a switch to electronic cigarettes.

The tax increase raises Minnesota’s national rank for cigarette taxation from 28th to sixth. The average per-pack price is going from about $6 per pack to more than $7.50.

As part of the tax conversion, retailers must take inventory on packs already in stores. By mid-July they must report their counts to the state and pay a one-time floor stock tax by early September. Floor tax proceeds have been earmarked to pay debt on the new Minnesota Vikings stadium.