Cub Scouts do outreach in park 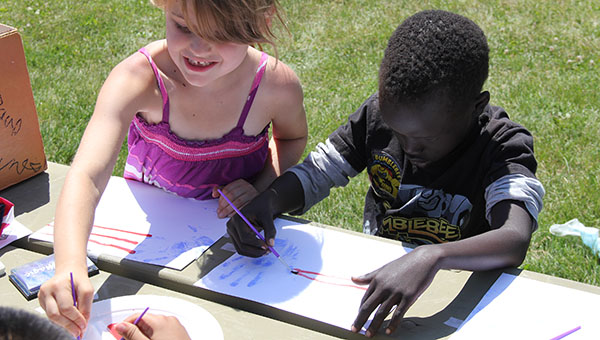 Cub Scouts and Boy Scouts shouldn’t be just for the boys whose parents know how to sign them up, said Paula Nuessmeier of the Twin Valley Council Boy Scouts. 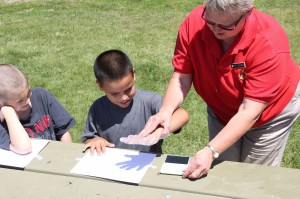 Paula Nuessmeier of the Twin Valley Council Boy Scouts holds the ink-covered hand of 8-year-old Jesse Solis on Tuesday at Sondergaard Park in Albert Lea in showing other children how to do a craft project. — Tim Engstrom/Albert Lea Tribune

That’s why she is doing projects common in Cub Scouts every Tuesday at Sondergaard Park in Albert Lea last month and this month between 2 and 3 p.m. It gives children a chance to see what the Cub Scouts offer.

“We want to connect with all the boys, not just the ones who get Scouting fliers,” she said.

On Tuesday, she showed up with a Boy Scout, and the duo showed eight boys and girls how to paint a U.S. flag and learned about Independence Day. They also played games with the children and talked about being citizens.

Helping them were two city attendees with the play park program.

Anyone — boy or girl — is welcome to come to the park on Tuesdays, Nuessmeier said. She said the Twin Valley Council leaders have been doing outreach this summer in an effort to expose more boys to Cub Scouts.

Between the two districts, Nuessmeier oversees 1,150 Scouts and 500 adults registered to lead the Scouts.

Boys no longer are required to enter the Scouts in the fall. They can enter year-round.