Private family memorial services for Duane D. Zimmer, 76, of Glenville will be held at a later date. Online condolences are welcome at www.bayviewfuneral.com. 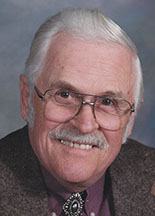 Duane was born May 23, 1937, in the village of Vesta. He was baptized on June 13, 1937, and confirmed May 6, 1951, at St. John’s Lutheran Church of Vesta. On Sept. 11, 1955, Duane was united in marriage to Mona Lea Kuester in Seaforth. Together they raised three sons and one daughter. Duane joined the Air Force and served from 1955 to 1958 where he trained to be a firefighter. Upon leaving the Air Force, Duane began his career as a firefighter at Wold Chamberlain where he remained until he retired at the age of 53. Duane enjoyed raising horses, playing cards, square dancing, working in his wood shop, auction sales and watching his grandchildren grow up.

Duane was preceded in death by his parents; grandparents; two brothers; one sister; and two grandsons.

He was greatly loved and will be greatly missed.