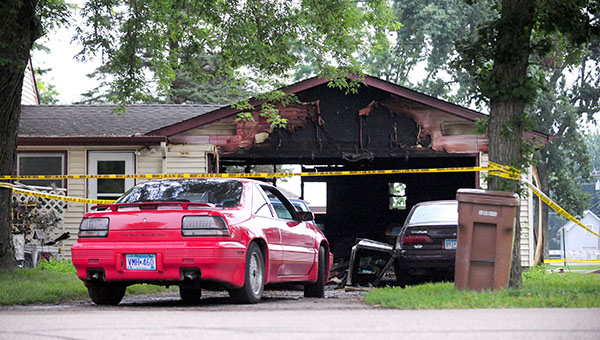 A fire that started at 3 a.m. this morning burned the garage at 310 Third St. SW in Glenville. Leona Herman and her son, David, who live in the home, were unharmed.
–Brandi Hagen/Albert Lea Tribune

GLENVILLE — Two people escaped unharmed this morning when the garage attached to their house caught fire while they were sleeping.

Leona Herman and her son, David, were awoken at about 3 a.m. by the smell of smoke in their home, at 310 Third St. SW.

“If it would have been five more minutes it probably would have got to the house,” David said. “I’m thankful no one got hurt and that it didn’t do a lot of damage to the house.”

Neighbor Gordy Martinson called the Glenville Fire Department at about 3 a.m. because he saw flames in the garage window.

But around 3 a.m. Martinson heard a horn honking outside like someone was trying to catch the attention of another person. 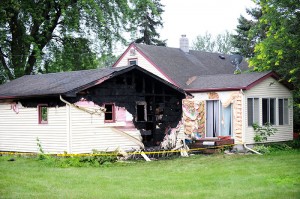 The garage at 310 Third St. SW in Glenville burned around 3 a.m. this morning. The two people in the home, Leona and David Herman, were unharmed.

When Martinson looked out the window he saw the flames and said it wasn’t long before they were coming out of the north end of the garage. He added the unknown passerby had approached the house to knock on the door.

Because they had smelled smoke, the Hermans were already awake and David got himself and his mother, who is confined to a wheelchair, out of the house safely.

David said the three cars that were parked on the property this morning were not in the garage at the time of the fire. Besides losing the garage, a lawn mower and mobility scooter that were inside of it were ruined.

The home is still intact with some siding damage on the side that faced the garage, and the kitchen was inspected for damage. The garage was the kind that attaches to the house through a breezeway, rather than under the same roof.

David said that it is still undetermined what caused the fire but he suspected that an electrical outlet in the garage may have been the problem.

He isn’t sure why it would have happened, though, because nothing was plugged in to the outlet and it hadn’t been used recently.

David said someone from the fire department was going to be back today to investigate.