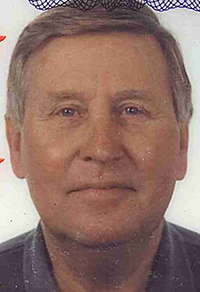 Ed was born Oct. 21, 1932, to Theodore and Margaret (Koep) Klimek in Urbank. He graduated from Parkers Prairie High School and then served in the Army of occupation in Germany. He moved to St. Paul and began his career in trucking with Murphy Freight Lines. He married Martha Lee Dahmen at St. Augustine Catholic Church in Austin on April 25, 1959. She preceded him in death after 32 years of marriage.

They moved to Austin in 1962 where they raised their family and started Klimek Transfer and Storage, which they owned and operated until 1995. Ed then drove for AM Cat until ill health forced him to retire in 2008.

Ed loved to travel and he extensively explored this country, Canada and Europe. He had a great love and respect for nature and spent many happy hours tending to his garden and acreage, inviting many to come and enjoy its beauty. Ed was an avid bicyclist, logging up to 2,000 miles a year. He especially enjoyed spending time at the cabin near his childhood home referring to the surrounding countryside as God’s country.

Family was important to Ed and he excelled in his role as a wonderful loving husband, father, grandfather, brother and uncle. Ed was a friend to many and he in turn cherished the many friendships he had formed. He was a man of deep and quiet faith and kept God close to his heart every day of his life. He donated his time willingly and gave generously to those who were less fortunate.

Although he lived with cancer for many years, he accepted it with humility and grace and never lost his love for life. Ed was a member of St. Augustine Catholic Church, the Knights of Columbus, the American Legion and served on the cemetery board and the school board for Pacelli High School.

In addition to his wife, he is preceded in death by his parents; sister, Alice Leif; and his triplet baby sisters.

The family wishes to sincerely thank all those who contributed to Dad’s care, with special gratitude to Dr. Timothy Moynihan for his many years of compassionate and dedicated service.

A funeral Mass will be celebrated at 1:30 p.m. Sunday at St. Augustine Catholic Church with the Rev. Paul Nelson officiating. There will be a 4 p.m. rosary and a 6:30 p.m. wake service on Saturday at Mayer Funeral Home where friends may call from 4 to 7 p.m. and also one hour before the service at the church on Sunday. Interment will be in Calvary Cemetery with military rites by American Legion Post No. 91.

Memorials are preferred to Food for the Poor.