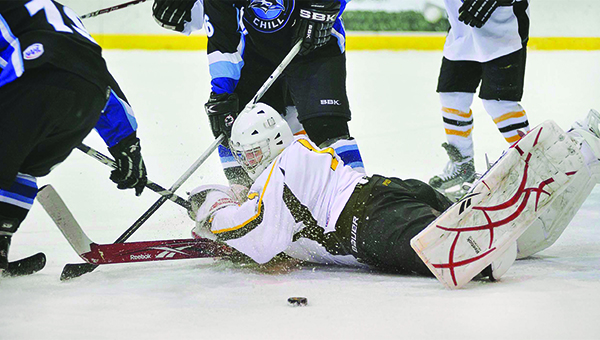 Austin Bruins goalie Eamon McAdam hits the ice while trying to make a save during the second period against Coulee Region at Riverside Arena Friday night. McAdam was selected by the New York Islanders with the 70th overall pick in the third round of the NHL Draft. McAdam is still expected to begin his freshman season at Penn St. University this season. McAdam, a native of Perkasie, Penn., spent the last three seasons with the Waterloo Blackhawks of the USHL, and he compiled a record of 31-18-3 in that span. When he was with the Bruins in the 2010-2011 season, McAdam played in nine games and had a record of 2-4-2 with a save percentage of 90.4. — Eric Johnson/Albert Lea Tribune