Gallery: Food on a stick is everywhere at fair 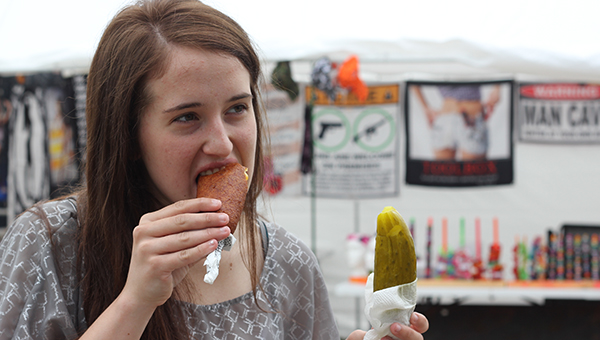 With empty stomachs, the Albert Lea Tribune interns headed out on a mission.

Our goal was to try every fair food we could find on a stick at the 2013 Freeborn County Fair. As we made our way through the food vendors, we realized our goal was not as simple as it seemed.

Not all foods were clearly labeled that they were served on a stick. With a little bit of hard looking and asking around, the we managed to each find a three course meal consisting of only foods on a stick.

The first stop made was at Pronto Pups for an appetizer. A cheese pup was freshly made for intern Quinn Andersen. For $5.50, she got an ooey-gooey cheese filled corn dog shell on a stick.

The second appetizer chosen was a pickle on a stick from the Philly steak sandwich stand. For only $1, I got a crisp, juicy, oversized pickle on a stick. It satisfied my salty cravings. I also had to strategically eat it to avoid getting pickle juice everywhere. 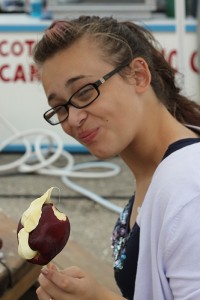 Next, we scouted out our main courses. We started to become hopeless, but suddenly noticed MoeGoe’s, a bright red food stand. Clearly written across the outside of the stand was “shrimp kebab.” I knew that’s what I would be getting. Given the choice of cajun or garlic, I chose garlic and after a few minutes and giving the lady working $4.25, I was handed a fresh off the grill shrimp kebab. It was perfectly seasoned and cooked just right.

Andersen’s main dish was similar to mine. She chose the classic Greek shish kebab from the Greek shish kebab and gyro stand. It was pulled fresh off the grill right when we ordered it. The signature fair food didn’t let Andersen down one bit and for $4, you can’t go wrong.

“It was well done and well seasoned,” Andersen said.

Finally, we were on to dessert. I made my way over to Aunty L’s Deep Fried for a slice of $4.50 frozen chocolate covered key lime pie on a stick. It was refreshing, and the thick chocolate coating gave it a little variety to your average pie.

Andersen picked out a taffy apple from Tonk Taffy for $3. The apple was extremely juicy, and the banana taffy wrapped around it was true to flavor.

“There could have been a banana in the apple, and I would have believed it,” Andersen said.

After taking just a small peek into what can be served on a stick, we can’t wait to try whatever else is out there. 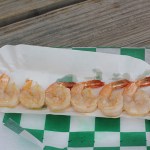 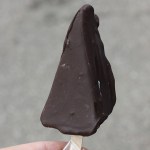 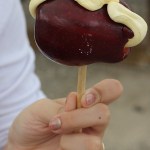 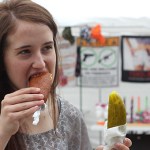 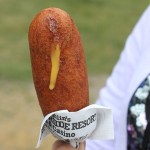 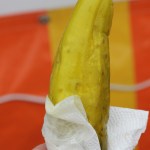 Pickle on a stick from Philly Steak Sandwich stand. 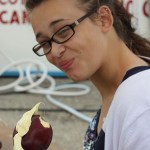