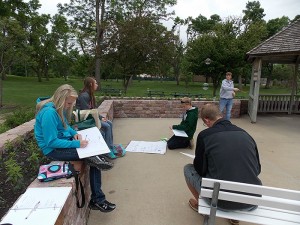 This year for the Glenville-Emmons FFA officer retreat the group went to Sioux Falls, where they stayed at the Ramada.

The group did a lot of planning for the new year in the hotel lobby and also in a few different parks. The first night there the team went out for supper at Grille 26 to practice etiquette. 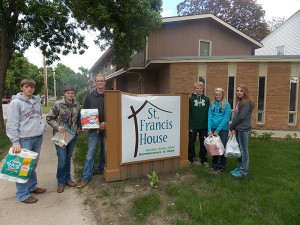 They visited The Corn Palace and St. Francis’s Shelter where the officers served supper for about 20 people and packed many lunches for people to pick up. Helping out at the shelter was a good experience, so the group treated themselves to a few hours at Thunder Road where they rode the slick track go-karts.

FFA members also went through the laser maze and participated in a few other activities. That night the team bonded over pizza and planning at the hotel.

On the way home the group stopped by the Falls in Sioux Falls to do a little more planning for this upcoming year. Seeing the falls was one of the highlights of the trip. A baby duck was caught there and the group wanted to bring it home but their adviser made them put it back. Glenville-Emmons FFA Reporter Mady Wangen said she thinks the officer team is great and the goals they have in place will make them even better.