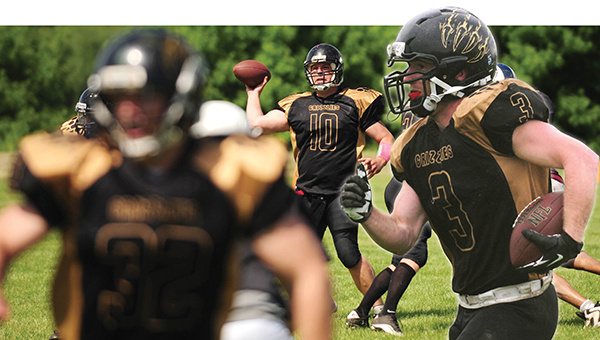 Albert Lea Grizzlies quarterback Tony Tolbers throws a pass against the Dodge County Outlaws. The Grizzlies won 60-0. Tolbers led Albert Lea with 1,161 passing yards on 73 completions. He also rushed for 209 yards and six touchdowns. Inset: Jason Kuipers led the Albert Lea Grizzlies’ rushing attack with 655 yards on 141 carries for an average of 4.6 yards per carry. He scored four rushing touchdowns, caught two more and he was one for one through the air for a score. — Photo illustration Micah Bader/Albert Lea Tribune

The Albert Lea Grizzlies caught fire by winning five straight regular season games, but they were bounced from the Southern Plains Football League playoffs by the same team they beat in their regular season finale.

“One of the biggest positives of the year was our ability to pick up the pieces after a bad start to the year, and mold it into something that gave us hope in the face of adversity,” Grizzlies president and offensive tackle Matt Mirowski said. 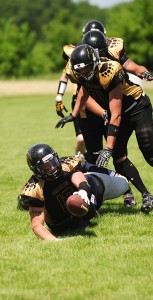 Trent Leesch of Albert Lea stretches the ball across the goal line to give the Grizzlies a 22-0 lead over the Dodge County Outlaws in the second quarter. Albert Lea won 60-0. Leesch caught eight passes for 186 yards and a touchdown during the season. His 49-yard reception was the Grizzlies’ longest of the year. — Micah Bader/Albert Lea Tribune

After dropping games to the North Iowa Bucks and South Central Hawgs on the road, Albert Lea hit its stride in its first home game.

The Grizzlies won 28-7 over the Buffalo Ridge Wildcats — a team that will play for the SPFL championship against the South Central Hawgs — to start a streak of five straight wins.

Albert Lea continued the season with victories over the Minnesota River Valley Shock, The Panic, the Dodge County Outlaws and the Steele County Warriors.

In the playoffs, the Grizzlies’ season ended with a 24-12 home loss to the Steele County Warriors.

“Our expectations were to represent the SPFL in Oregon and win a championship,” Albert Lea head coach and offensive coordinator Stephen Piper said. “That didn’t happen, but some of the things we wanted to do came together both offensively and defensively.”

Tony Tolbers led the Grizzlies’ offense at quarterback. He was 77 of 140 through the air with 1,161 yards, 13 touchdowns and nine interceptions.

Tolbers was also a potent rushing threat on designed draws and scrambles. He led Albert Lea with six touchdowns, and he rushed for more than 200 yards.

For the third straight season, tackles Craig Schmidt and Mirowski worked together to pave the way for the Grizzlies’ backfield.

“I think our run game was the best I’ve ever seen it since I’ve been with the Grizzlies,” Mirowski said. “For the most part, we controlled the line of scrimmage and the backs were able to focus on where the holes were and hit them for good yardage.”

Jason Kuipers was Albert Lea’s workhorse back. He earned 655 yards on 141 carries and scored four rushing touchdowns to go along with 239 receiving yards.

George Gerdes and Spencer Niebuhr led the Grizzlies’ receivers with three touchdowns each. Gerdes posted a team-high 255 yards on 13 receptions, and Niebuhr snagged a team-high 20 receptions for 250 yards.

Defensively, Trevor Haugh led the team with 45 tackles. Jeremiah Falck and Kaelyn Kohtz each posted more than 30 tackles. Big plays happened regularly when Anthony Ingram was involved. He led the team with three fumble recoveries, one of which he returned for a touchdown. Ingram also scored by sacking Dodge County’s quarterback in the end zone for a safety. He earned 11 of the Grizzlies’ 18 sacks.

Piper was assisted by Jeff Jimenez.

“In the past, I’ve had to work with all aspects of the game, but it was a whole lot more fun having Jeff on board to take care of the defense and special teams,” Piper said. “That way, I could focus 100 percent on offense.”

“Along with Stephen, Jeff brought a wealth of knowledge, passion and fire to our sidelines,” Mirowski said. “This was the best year in the three that I’ve been involved with the Grizzlies in terms of organization. It will only get better from here on out.” 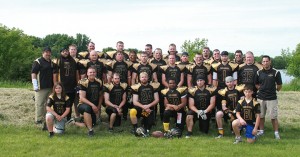 The Albert Lea Grizzlies football team poses for a photo after their final home game of the season, a 60-0 win over the Dodge County Outlaws. — Submitted

Piper is in his fourth year as Albert Lea’s head coach. A decade ago, he helped coach the Albert Lea Tigers’ junior high team. Now, some of those guys are on the Grizzlies’ roster: Jered Talamantes, Colton Zuniga and Marc Kruger.

“The transition has been from teaching technique to tweaking,” Piper said. “But, they still need me to point out when they’re doing something wrong.”

“That was something that we encouraged in the past, but we didn’t put much emphasis on it,” Piper said. “It really impressed me that guys were putting in the time to do that.”

Next season, the Grizzlies hope to return much of their roster.

“We’ve got a solid core coming back,” Piper said.

“These guys play because they love the game, and we’re committed to football and keeping this as a family event.”