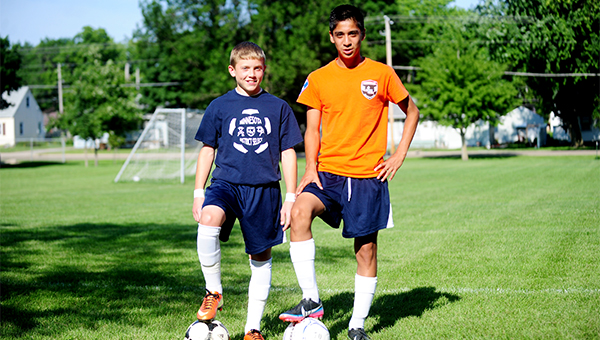 Drew Sorenson, left, and Anthony Huerta-Apanco stand Tuesday at Memorial Park in Albert Lea before playing the final game of the regular season as part of Albert Lea’s U13 boys’ soccer team. Albert Lea won 7-0. Sorenson and Huerta-Apanco have been selected to represent Minnesota Sunday at a regional camp. — Micah Bader/Albert Lea Tribune

Two soccer players from Albert Lea have earned state-wide recognition for their talent and skills on the pitch.

Anthony Huerta-Apanco, 13, and Drew Sorenson, 12, have been selected to represent Minnesota in the Olympic Development Program’s regional camp through the Minnesota Youth Soccer Association. 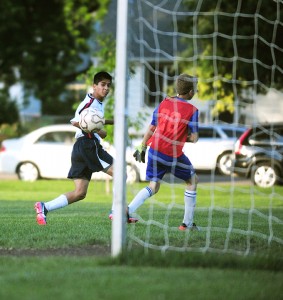 “I’m looking forward to the chance to play more soccer and get more training with the coaches,” Anthony said.

“More soccer pretty much says it all,” Drew said.

For Drew, the fact that he will be representing the state sunk in during tryouts right before his team took the field.

“When we broke after the timeout, we said, ‘Minnesota,’” he said. “I thought, wow, we’re used to saying ‘Albert Lea.’ It’s such a small area compared to the whole state.”

Each player needed to weather the storm of two cuts during tryouts for the chance to be selected to one of the four regional teams.

The elimination process began with a large pool of players. In Drew’s age group there were 190; in Anthony’s, 160. Anthony and Drew made the first cut down to 36 players, as well as the second cut down to 18 players.

“To make it this far is a tremendous achievement,” said Anthony’s father, Ramon Huerta-Apanco.

The regional camp that Anthony and Drew qualified for will be in Rockford, Illinois, on Sunday. While they are there, the top 18 players from the region will be selected for a national camp. 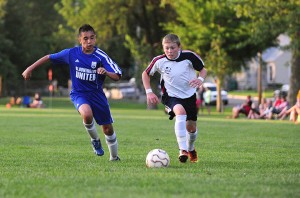 According to the Minnesota Youth Soccer Association website, the camps exist to provide player development, quality instruction and an opportunity to train with the best players in the country.

Players spend most of their time at the camps scrimmaging, and working on skills and technique, Anthony said.

During the season in Albert Lea, Drew competed on the boys’ 12U and 13U soccer teams. The 12U team took third place in the MYSA league standings with a record of 8-3-1.

Anthony, a striker, and Drew, a midfielder, teamed up on the U13 squad, and the squad produced a record of 9-0-1. The 13U team won its season finale Tuesday with a 7-0 victory over Bloomington United at Memorial Park in Albert Lea.

Anthony was a part of championship teams at the U11, U12 and U13 levels in the fall for Albert Lea.

Drew decided to focus on soccer instead of playing baseball for the 12AAA Albert Lea Knights this year.

“He was on a very successful team, and that was a very hard decision,” Tom said. “We didn’t push him either way.

“This was one of the reasons why he chose to play soccer — for a chance to make ODP.”