Marching band back on the beat 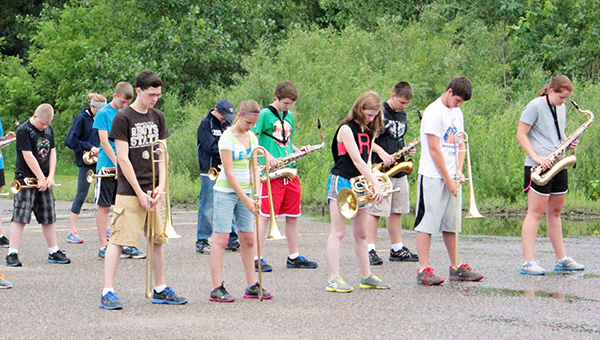 Students stand at parade rest until their performance. The band will perform in three events. The Third of July Parade begins at 6 p.m. Wednesday. –Erin Murtaugh/Albert Lea Tribune

The Albert Lea High School marching band is back in full swing this year.

After four years of being just a drumline, the band is in its second year of having a full band. This year, it also added a color guard. 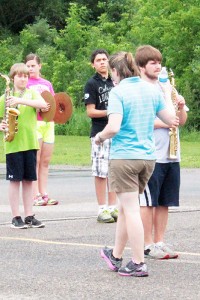 Suzanne Mauer lines up students on Wednesday. The group ran through a variety of exercises before practicing marching.

“The community likes to see the group out there,” Mauer said.

Mauer has seen an increase in numbers between the past two years. She said students enjoy it and think it is a fun activity. Last year, the band had around 45 members and the number has increased to about 70. 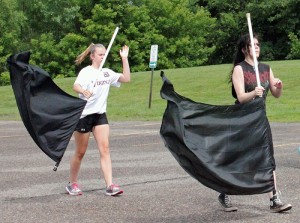 Madi Lindely, left, and Maria Silva, right, practice the routine for color guard. This is the first year the marching band had a color guard in since becoming only a drumline.

During practice, the band has a lot to accomplish, she said. Aside from learning and perfecting music, they also have to get costumes and work on marching.

“There’s a lot we actually do,” Mauer said.

Senior Ashley Holl is the drum major for the group. She keeps time for the drum section during performances. This is Holl’s second year in marching band. She joined last year and had fun participating.

“My favorite part is the actual marching,” Holl said. “It looks really cool when everybody is in step with each other.”

Kailie Drescher, a senior, is the leader of the saxophone section. Drescher uses marching band as a way to keep in touch with her friends during the summer. 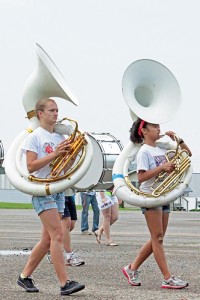 Emma Behling, left, and Abby Sencio, right, practice marching on Wednesday. The band runs through their routine in the high school parking lot.

“We are growing and becoming a bigger band,” said Drescher. “It makes it more fun.” 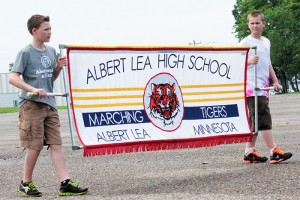