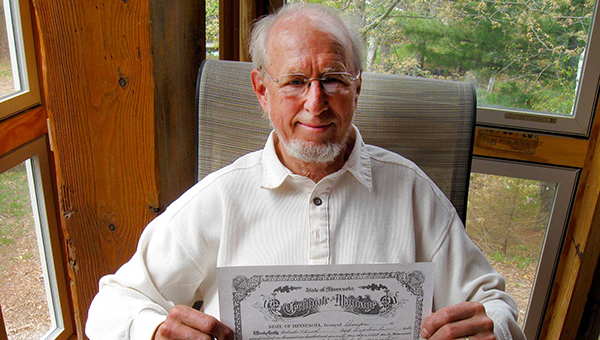 Roger Lynn is shown at his home, May 25, 2013, in Cross Lake. Lynn is the Methodist minister who married Jack Baker and Mike McConnell in 1971. -Sasha Aslanian/MPR

MINNEAPOLIS — Minnesota’s new marriage law goes into effect Aug. 1, creating new urgency for many faith communities about whether they will perform such weddings, particularly those that have been wrestling with how to address sexual orientation for decades.

Among those torn over the issue are Methodists, who have a unique history on the matter in Minnesota — as retired Rev. Roger Lynn would surely testify.

On Sept. 3, 1971, Lynn performed a wedding that would define his career as a United Methodist minister. In a large Victorian home in south Minneapolis, he married two men: Jack Baker and Mike McConnell.

Lynn was a last-minute fill-in as officiant after another Methodist minister backed out. But Lynn believed it was the right thing to do.

“The Methodist Church at that time had no rules against marrying two men or two women for that matter,” Lynn said. “There wasn’t anything said for it or against it.”

“They kissed each other, and it was a very passionate kiss,” he said. “And it was just this strong sense of my own, like, ‘This is very different.’”