The words used in describing automobiles have interesting connections to the pre-motorized world of buggies, wagons and stagecoaches. Let’s explore some of them.

People call the storage space in the back of a car “the trunk” without a second thought, as though it is the primary definition of the word. But in the 1920s and 1930s, people would place a trunk — the kind used as luggage — on a mount at the back of the car. The cars were sold with a trunk that fit the mount.

Eventually, the competing automakers did away with the mount and incorporated storage space in the rear of the car. The trunk they sold consumers now was a rear compartment with a locking lid.

Interestingly, the British call the car’s trunk a “boot.” This term stems back to the days of horse and buggy. Because of the condition of the roads, people always needed boots for travel. Coachmen stored them in the boot locker, a compartment in the rear. Over time, it was applied to car trunks and, as English speakers tend to do, “boot locker” was shortened to “boot.”

This is a term to describe the panel in front of the driver with gauges for speed, fuel, revolutions per minute and such. In fact, “dashboard” has moved beyond cars to the world of computers, where it is a term for the display panel used for running a website, a computer or a program. In other words, it is a user interface. 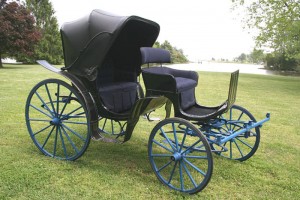 The dashboard on this Studebaker buggy is easily seen sticking up at the front.

We’ve come to associate dashboards with instrument panels, but it actually was a board on a carriage or wagon that prevented mud from being flung by horse hooves at the coachman or passengers. Sleighs have dashboards, too.

Considering they were pulled by horses, dashboards protected people from — let’s just say it — manure, too.

“Dash” has been in the language since the 1500s and means to strike or hurl with great force. “Dash” also came to mean to splash. However, “splash” wasn’t going to appear for another 250 years, when it morphed from “plash.” “Smash” wasn’t going to appear for another 300 years and first meant to kick downstairs. It took time to gain the meaning of break apart. “Dashboard” first appeared in print in 1846 when dash still retained its older meanings. A dashboard in today’s tongue might be called a splashboard.

Cars had engines, not horses, but “dashboard” was a term already in place for the panel immediately in front of the driver, so it stuck as carriages became motor cars. The dashboard protected the driver from the heat of the engine and eventually became a convenient place for instruments.

Nobody stores their gloves in the glove compartment anymore. Nobody drives with gloves, either. Heck, people barely pay attention to driving, as it is such an automatic function anymore. But in the early days of automobiles, driving was a task not taken lightly. Cars often weren’t enclosed or they just had a soft top. Wearing gloves kept the moving air from making hands cold and numb.

Now we keep maps, title, registration, proof of insurance and the owner’s manual in the glove compartment. We ought to call it the “paper compartment.”

Even in the winter, when I bring gloves wherever I go, I simply place them on the passenger seat.

Do cars really have fenders anymore?

A fender on a carriage keeps the wheels from throwing dirt onto the steps. On a bicycle, a fender prevents the dirt from hitting the rider. It is a shortened version of the word “defender,” and you can see how fenders defend us from mud.

In the early era of cars, they had fenders over the wheels to prevent mud and water from dashing — or plashing or splashing or smashing — onto the sides. Sometimes, the running board was separate from the fenders, but in some cars, they were connected, like on the Ford Motel T. In the 1940s, fenders were in their prime; they were big and round and beautiful. In the 1950s, fenders started to be incorporated into the body, as cars took on boxy shapes.

Today, some people interchange “fender” with “quarter panel,” which is accurate. Quarter panels, whether in the front or rear, are the exterior coverings on the corners of the car. My Ford Ranger has plastic pieces that flare out around the wheel wells of the four quarter panels. I might try to claim those are the fenders. In actuality, if I look up the part, they are called “fender flares.” The online parts people call the quarter panels for my truck “fenders.” So be it. I like fender better as a term than quarter panel anyway.

Speaking of running boards, this term originally meant the walkway on top of trains. I have no idea how it got from the top of trains to the step on the sides of cars and pickups. Maybe you can write a letter to the editor and tell me.