Motorcyclist injured in I-90 crash

AUSTIN — A Wisconsin man was injured Monday afternoon when a deer knocked him off his motorcycle in Austin. 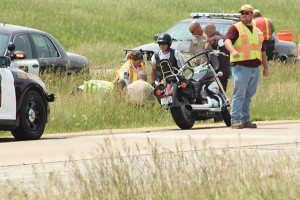 Mower County Deputies, State Patrol and Gold Cross EMTs tend to a downed motorcyclist who was injured in a crash Monday afternoon on Interstate 90 near the 28th Street overpass in Austin. –Matt Peterson/Albert Lea Tribune

According to the Minnesota State Patrol’s crash report, Gerald Nelson, 50, of Sheboygan Falls, fell off his motorcycle in the westbound lane of Interstate 90 near the 28th Street overpass in Austin when a deer ran into his 2006 Harley Davidson. Nelson was thrown into the median in a stretch of ongoing road construction at about 1:30 p.m..

A road worker directed traffic while Mower County deputies and Gold Cross EMTs helped the downed rider get onto a stretcher. Nelson had abrasions on both arms but was able to lift his arms while strapped to a stretcher. The Ambulance transported Nelson to the Mayo Clinic Health System in Austin. No alcohol was detected in his system, the report added.