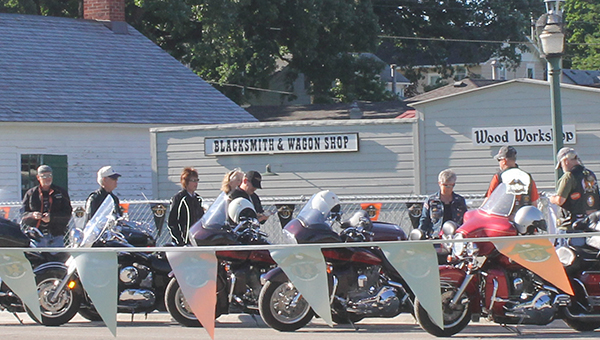 A motorcycle rally with roots in Albert Lea returned this past weekend.

Albert Lea hosted the first three Minnesota state Harley Owners Group rallies — in 1991, 1992 and 1993. While the rallies are 22 years old, the group that goes by the name H.O.G. turns 30 this year, and its members chose the Freeborn County Fairgrounds as the place to celebrate.

H.O.G. members from across the United States came to ride with the Bergdale Harley-Davidson chapter. It’s all about riding and having fun, said regional manager J.T. Hasley. With nearly 85,000 members in North America, it’s easy to make friends from other states, he said.

“Harley has always had a real tight camaraderie,” Hasley said. “It’s like a big family.”

To make a big event like this happen, it took a year of planning and more than 1,800 man hours in the last six weeks alone, Hasley said. There is a core committee of eight along with about 100 volunteers. Hasley credited that to the experience of the committee.

The fun began Thursday and ended Saturday, when many took off for Borderfest in Emmons.

Each rally offers ride routes and parties. Hasley’s goal is to keep it safe, fun and family-oriented.

Harley-Davidson is celebrating its 110th anniversary and Bergdale Harley-Davidson was more than helpful in hosting the event, he said. They volunteered staff and hosted a welcome party.

Most people are just excited to see the area and use the rally as a stop along the way of a longer trip, he said.

Kansas City, Mo., resident Angie Horner was hoping to see the Jolly Green Giant statue in Blue Earth and the Buddy Holly show at the Ordway Center for the Performing Arts in St. Paul along with the mermaid statue in Fountain Lake.

This rally was Kathy and Sam Hermonstorfer’s first; they just bought their first bike and rode down from Anoka.

Harley is a welcome community where there are no social classes and everyone’s the same, Hasley said. People come from all over to experience it. From New Mexico, Illinois and Canada, people will ride to join in the celebration that is a H.O.G. rally.