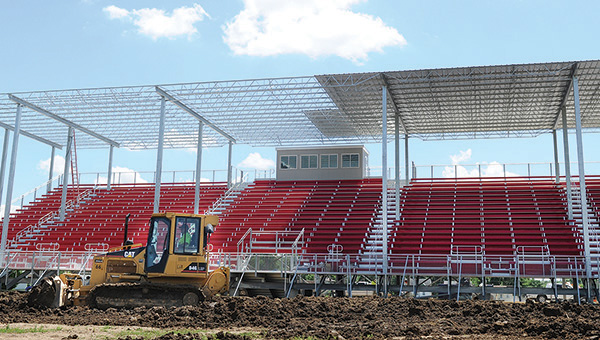 A bulldozer moves ground in front of the grandstand as the new structure nears completion at the Mower County Fairgrounds Tuesday. –Eric Johnson/Albert Lea Tribune

AUSTIN — With the 2013 Mower County Fair just weeks away, the new grandstand is right on schedule.

“The grandstand part of the project is nearing completion,” Public Works Director Mike Hanson told the Mower County Board on Tuesday.

With the seating nearly complete, there’s still work to do on the roof, concrete, water lines and some electricity, but Hanson anticipates everything should be ready for the fair Aug. 6 to 11. Work on fencing around the grandstand should start this week. 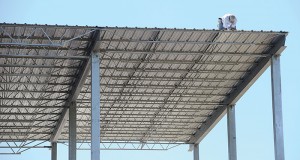 A construction worker works on the awning of the new grandstand Tuesday at the Mower County Fairgrounds.

The old grandstand was demolished in a controlled burn after a structural engineer deemed it unsafe for use before the 2012 fair.

After dry rot was discovered in its wood base, a structural engineer deemed it unsafe shortly before the 2012 fair. The Austin Fire Department demolished the old grandstand in a controlled burn on Feb. 2.

Cost: Regular tickets are $10 and free for children age 5 and younger

A $36 Grand Pass is good for six admissions for grandstand events on Tuesday, Wednesday, Thursday, Saturday or Sunday at the 2013 Mower County Fair.