Outstanding senior to be recognized at county fair 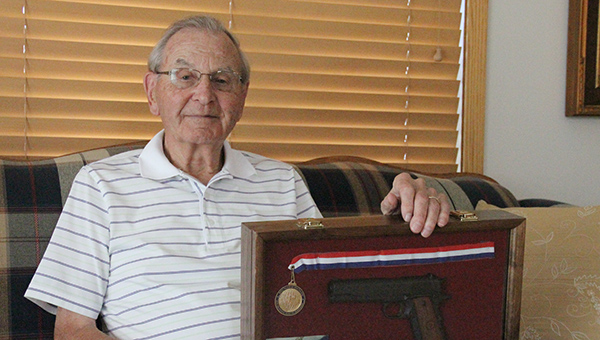 This year just one outstanding senior will be recognized at the Freeborn County Fair.

Typically, two seniors are recognized each year on Senior Citizen Day during the fair. The event will be at 1 p.m. Wednesday in Entertainment Square.

The following is more about this year’s Outstanding Senior, Art Ludtke.

Ludtke, 87, whose full name is Arthur Ludtke Jr., lives in Albert Lea with his wife, Donna. They have been married for almost 65 years. When he first found out he was given the Freeborn County 2013 Outstanding Senior Citizen Award he was surprised.

“I was completely shocked,” Ludtke said.

Ludtke was born in Walters and went to grade school there. Then he attended high school in Kiester. His family moved to Clarks Grove, and then he graduated from Albert Lea High School in 1944. He graduated on a Thursday night, turned his gown in on Friday and left at 6 a.m. Saturday for the Navy. He served in the Pacific Theater and was only home twice during two and a half years of serving. He then worked in the grain elevator business for 52 years.

Ludtke has been active in the area for all his life. Currently he’s on the Shell Rock River Watershed Board and the Fountain Lake Subwatershed Committee.

Ludtke is on committees and is an usher at First Lutheran Church. He’s a member of the Albert Lea American Legion Leo Carey Post 56 and Freemond Madson Veterans of Foreign Wars Post No. 447.

He has flown on the Honor Flight from Rochester to Washington, D.C., and he was also one of three veterans to receive the Saipan Commemorative Medallion in 2012 for his service in World War II.

Ludtke’s granddaughter, Mollee Tscholl, nominated him for the award and said he is a giving and loyal person.

“He’s the kind of man who would give you the shirt off his back if it would make your life better or easier in any way,” Tscholl wrote in her nomination letter.

Tscholl also wrote that he was president of the board of directors for the Albert Lea-Freeborn County Chamber of Commerce and a volunteer firefighter. He was a member of the first board of directors at Lea College for four years. He served on the District 241 school board during a time when six new schools were built and land was bought that now houses Riverland Community College.

“Those things were important to me,” Ludtke said of serving area schools.