Funeral services for Owen Kvenvold, 91, of Albert Lea will be at 10:30 a.m. Saturday at Grace Lutheran Church. The Rev. Todd Walsh will officiate. Interment will be in Hillcrest Cemetery with military honors accorded by the members of the American Legion and the VFW. Visitation will be from 4 to 7 p.m. Friday at Bayview/Freeborn Funeral Home and one hour prior to the service at the church on Saturday. Online condolences are welcome at www.bayviewfuneral.com. 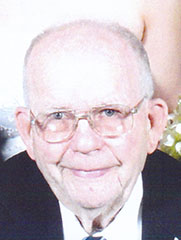 Owen Irving Kvenvold was born in Albert Lea on Aug. 7, 1921, the son of Alfred and Anna (Rofshus) Kvenvold. He grew up in Albert Lea and graduated from Albert Lea High School in 1940. Following high school he attended the Dunwoody Institute for machinist training. His entire graduating class then joined the U.S. Navy. Owen served as a machinist’s mate, third class during World War II from 1941 to 1946. On May 28, 1946, he was united in marriage to Dorothy Bowman at First Lutheran Church. He worked for Queen Stoves for 12 years and then for Streater for 26 years as a tool and die maker. Owen was a member of Grace Lutheran Church, the American Legion, the VFW, the Eagles Lodge and the Moose Lodge. He enjoyed fixing anything. He loved tinkering in his basement, rebuilding sewing machines and was always repairing stuff for others. He also enjoyed weekend family trips and yearly vacations going fishing.