Funeral services for Parnell M. Brackey, 82, will be at 10:30 a.m. Wednesday at the Emmons Lutheran Church. The Rev. Christopher Martin will officiate. Interment will be in the Lunder Lutheran Cemetery with military honors accorded by the Emmons American Legion. Visitation will be from 4 to 7 p.m. today at Bayview/Freeborn Funeral Home and one hour prior to the service at the church on Wednesday. Online condolences are welcome at www.bayviewfuneral.com. 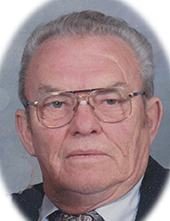 Parnell died early Sunday morning, June 30, 2013, at the Good Samaritan Society in Albert Lea after a recent admission for an extended illness.

Parnell Marvin Brackey was born on Dec. 5, 1930, in Leland, Iowa, the son of Palmer and Myrtle Brackey. He was baptized in Leland and attended school there and in Kiester. He was confirmed at the Immanuel Lutheran Church in Kiester. At age 17 Parnell enlisted in the U.S. Air Force and served two years in the Korean Conflict. Parnell was united in marriage to Marjorie Quam on July 12, 1953. They would have celebrated their 60th anniversary in a few days. In his early years, Parnell was employed at Smith Douglas, Emil Olson and also farmed. He was a livestock dealer in Scarville, Iowa, and later started his own business as a licensed livestock dealer in Emmons in 1968. He enjoyed his annual fall cattle buying trips to northern Minnesota. Parnell was involved in several business ventures in the Emmons area including developing real estate lots and houses, the Arrowhead Golf Course and farmland.

Parnell was a member of the Emmons Lutheran Church, a volunteer with the Emmons Fire Department and a member of the American Legion. He served on the Emmons School Board and was honored to serve as grand marshal for the 2012 Borderfest Parade. Parnell was a loving family man. He enjoyed golf, bowling, dancing, playing cards and coffee and conversation with friends.