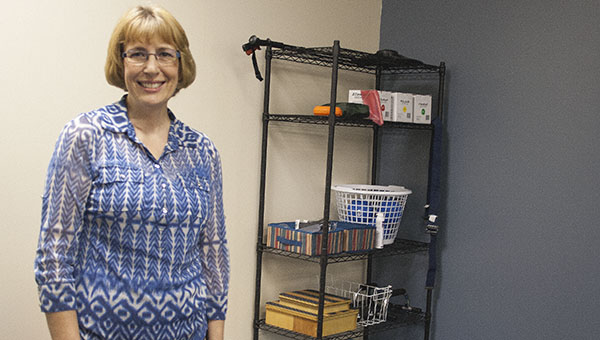 Kathy Johnson of Johnson Physical Therapy stands in front of some of the equipment in her office at Skyline Plaza on Thursday. Johnson opened her private practice in April. — Sarah Stultz/Albert Lea Tribune

When rural Albert Lea resident Kathy Johnson was younger, her next-door neighbor was a physical therapist.

After job shadowing her neighbor, she said she fell in love with physical therapy and decided to pursue it as a career.

In 1981, she obtained her degree from the University of North Dakota and has since worked in several different health care settings, including large hospitals, home health care, nursing homes, small rural hospitals and private practice.

“That’s why I decided to open my own practice,” she said. “I love the small setting where I really get to know my patients.” 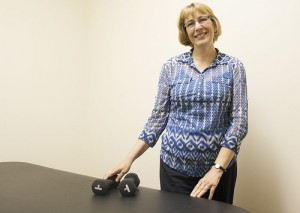 The North Dakota native moved to a house on Pickerel Lake about a year ago with her husband, Bruce, who is a retired athletic trainer, to be closer to family.

She opened her own practice — Johnson Physical Therapy — in the middle of April.

Her office is in Skyline Plaza, a few doors down from the interior entrance to the Albert Lea Senior Center.

Johnson said she specializes in postural restoration and is trained in correcting muscle imbalances that result in pain and dysfunction. She is the only postural restoration certified therapist in southern Minnesota and also travels around the world teaching dentists how to integrate physical therapy into their care for patients with head, neck and face pain.

“It’s my passion, and the reason why is it’s not a cookbook,” she said. “I have to look at every person who walks in the door as a complete individual.”

She said each patient who walks through her doors ends up with an exercise program that is tailored just for them. Most of her patients are baby boomers who want to stay active and healthy. To be sure, she is not a Medicare provider.

She said it is her individualized attention that sets her apart from other physical therapists.

“It’s that attention to detail,” she added.

Plus, she said, she doesn’t have set hours. She could be at the office at 6 a.m. if a patient needed to be to work at 7 a.m., or she could be there after work if that works better.

“I want to make physical therapy accessible so people don’t put off their own health care needs,” Johnson said. “I think it’s important for people to understand that when their doctor hands them a prescription for physical therapy, you can get that filled anywhere. Just like a prescription for medication, they can go wherever it meets their needs.”

Johnson can be reached at by phone at 507-473-2200 or through her website at johnsonphysicaltherapy.com.