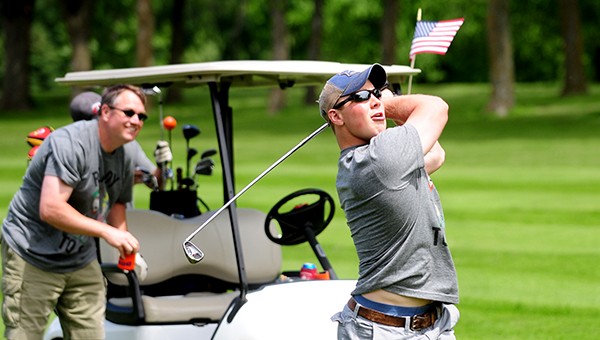 Justin Holland swings a club on the fairway Saturday during the Corey Goodnature Golf Classic. Holland has participated in the event for five years. — Micah Bader/Albert Lea Tribune 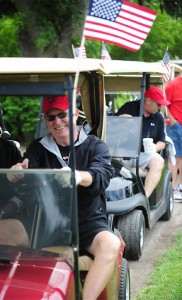 “It keeps Corey’s memory alive, and we get to talk about him,” Corey’s father Don Goodnature said. “When people bring it up, they feel like we don’t want to talk about it. Well, it’s just the opposite.

“We want to talk about it. We like to tell his story, and we want people to know. We never want to forget.”

“It’s awesome having the chance to reminisce with friends about Corey,” said Jordan Holland, a golfer on the ‘Ready to Score’ team. “It’s a tradition.”

Forty-nine teams registered for the four-person, nine-hole best-shot tournament, and some teams ballooned to as many as eight people. The total number of golfers was more than 200.

“The fact that it’s been growing every year shows real dedication from the community,” Corey’s mother Deb Goodnature said. “It’s a way to show support for the military.”

Some participants were local, and others were out-of-state. Roger Martin made the trek to Minnesota from North Carolina. Martin and Corey were both Chinook pilots in Unit B3160 of the U.S. Army.

Three years passed since Martin was able to get enough time off from work to make the trip. He said the Goodnature clan is like a second family, and he likes the community in Albert Lea area.

“The world right now can fill a person with jaundice and contempt, but you come here and you meet good people,” he said. “They look you in the eye and shake your hand, and they mean what they tell you. That’s hard to find out there.” 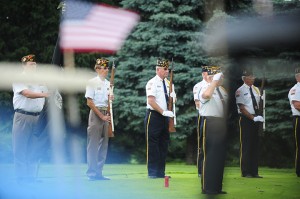 All proceeds from the tournament go to the Corey Goodnature Memorial Scholarship Fund.

“The whole county contributes to this. That includes farmers and people from small towns in the area. It’s everybody,” Don said. “That’s why we decided to give scholarships to all the schools in the county.”

“For all the devastation, a lot of good has come from it,” Deb said about the golf outing and scholarship.

Along with being a decorated Chinook pilot, Corey was a graduate of Albert Lea High School. On June 28, 2005, he died in a crash on a mission to save a team of Navy SEALs under heavy fire in the mountains of Afghanistan.