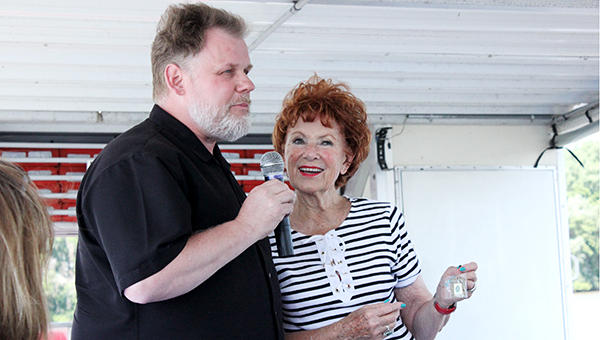 Randy Cirksena presents Marion Ross with a memento to represent a key to the city while riding the Pelican Breeze II on Friday afternoon. — Erin Murtaugh/Albert Lea Tribune

Marion Ross boarded the Pelican Breeze II on Friday afternoon with a small group of guests for a luncheon cruise. With the theme of the event being “Bloom Where You’re Planted,” Ross was welcomed aboard by first mate, Gail Levorson.

“When given an opportunity, say yes to life,” Ross said during her greeting.

Those in attendance were friends of Ross, people who have helped with her events throughout the week and media.

Once the boat took off from shore, Randy Cirksena, an Albert Lea-Freeborn County Chamber of Commerce representative, presented Ross with a memento to represent a key to the city. Lunch was served buffet style, and guests were given time to visit with Ross. After lunch, Levorson gave some facts about the Pelican Breeze II and Albert Lea Lake. 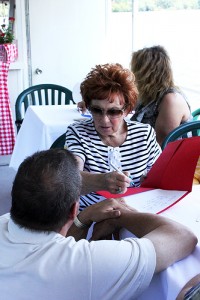 Marion Ross visits with guests while signing an autography. Ross attended a private luncheon on the Pelican Breeze II in her honor on Friday. — Erin Murtaugh/Albert Lea Tribune

“My favorite part of the ride was seeing pelicans,” Ross said.

Ross said there are pelicans in California but they are not as majestic-looking as the ones in Minnesota. Ross also said she enjoyed getting to meet everyone aboard.

Ross said her trip back to her hometown has been touching.

“It makes me tear up knowing I am dreamed of,” Ross said. “I never dreamed anything like this would happen.”