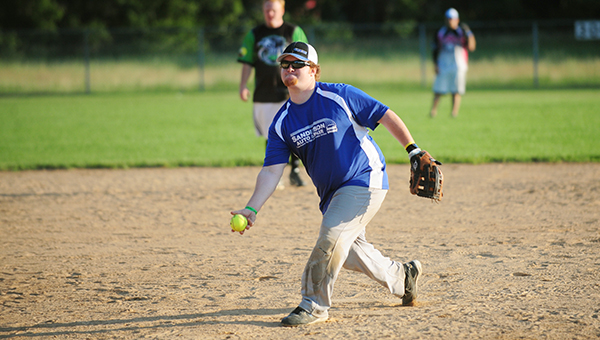 Softball players in Albert Lea have a reason to dust off their gloves on Sunday evenings.

The Albert Lea Parks and Recreation Department moved it’s coed softball league from the fall to the summer this year at Snyder Fields. 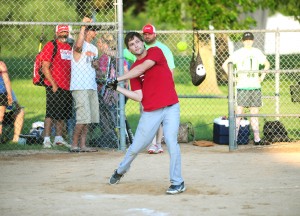 Jeremy Baldwin of the Our Savior’s Lutheran Church coed softball team keeps his eyes on the ball before he swings Sunday against the Master Batters. — Micah Bader/Albert Lea Tribune

“We like to play in the coed league so wives and girlfriends can experience it too, instead of just watching from the stands,” he said.

Albert Lea Parks and Recreation Program Supervisor, Jennifer Davis, said that was the main reason for the league’s existence.

“It’s something people can do with a spouse, and it’s just something else we can offer adults,” she said. “It’s good to have, because most other programs focus on kids.”

With five teams in the league and three games every Sunday (6:30, 7:30 and 8:30 p.m.), one team plays a doubleheader each week. On Sunday, that team was Our Savior’s Lutheran Church.

“It’s fun to have a team, play some ball and be out in the community,” Our Savior’s pastor, manager and softball player James Kassera said. 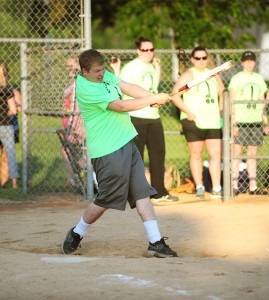 With the rain and moisture in June, the league was forced to postpone half of its games, but that hasn’t stifled the enthusiasm, Davis said.

Cars-N-Credit/Army National Guard leads the league with a 3-0 record. The team stayed undefeated Sunday when it slipped past Re/Max 20-19.

The Albert Lea Parks and Recreation department also offers a men’s softball league that plays at Snyder fields each Thursday. This year, 11 teams signed up for the men’s league.