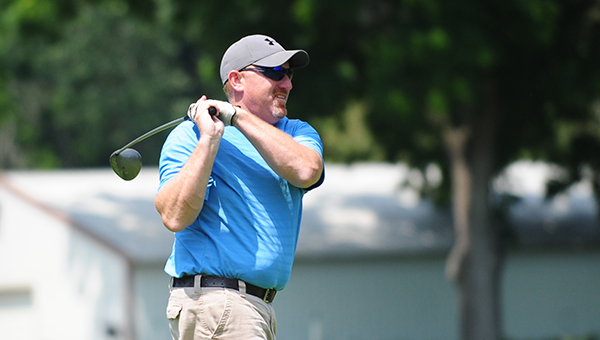 Ross Peterson drives the ball off the tee on the 10th hole at Green Lea Golf Couse Monday as part of the 50th-annual Chamber Ambassador Golf Outing. The event raises money for six $750 scholarships for students in Freeborn County. — Micah Bader/Albert Lea Tribune

“We were maxed-out again with 30 four-person teams,” Chamber Ambassador Co-president Brad Skinness said. “It allows us to maintain a good pace of play.”

The best-shot tournament began with a shotgun start at 12:30 p.m., and the event alternates host sites each year with Wedgewood Cove Golf Club.

A portion of the proceeds go toward six $750 scholarships for Freeborn County students. Winners this year were Robin Viktora, Taylor Jensen and Chrissy Monson of Albert Lea; Allison Songstad of Alden-Conger; Kendra Davis of Glenville-Emmons and Allison Scott of Riverland Community College.

“We look for a well-rounded balance of activities. It’s not just about the grades,” Skinness said. “It’s about the extracurricular activities and what they do within the community.

“These students are amazing. I don’t know where they find the time to do everything they do.”

Skinness said he hopes the chamber can increase the amount of the scholarships to $1,000 to lessen the burden of increased costs of schooling on students.

Area businesses contributed not only by playing golf, but by sponsoring all 18 holes and donating food, refreshments, gifts, goodie bags and raffle prizes.

“We couldn’t do this without the support of local businesses,” Skinness said. “They put their teams together. The donations and hole sponsorships are also huge.”

Paul Schuster of the Vern Eide Motorcars team could be found swinging on the course, and his employer sponsored hole No. 10.

“The scholarships are great,” he said. “It’s a worth-while event.”

Skinness estimated about 25 ambassadors helped with the event. 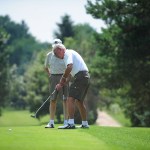 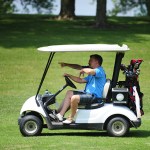 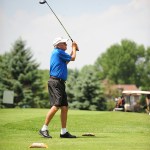 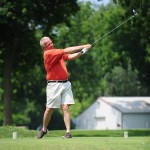