These days are ours! 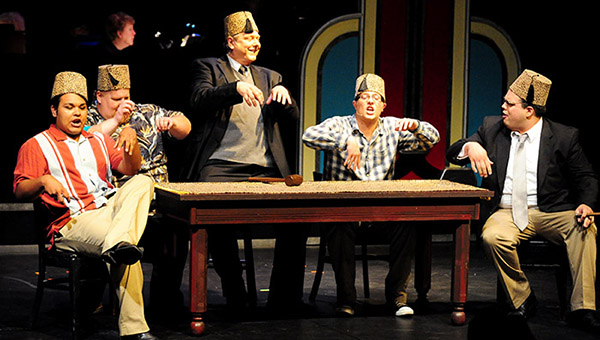 Happy days are here again — literally. The rockin’ and rollin’ tunes of the 1950s are featured in “Happy Days, a New Musical,” which opens tonight.

The musical, directed by Steve Kinney, has a whole host of songs that weren’t written in the ’50s, but they follow the same style. All the songs were written for the musical other than the title track.

During the first week of shows, Albert Lea’s sweetheart Marion Ross will be present at each showing. She will speak right before the curtain is up, and she will be around after each show to mingle with the audience and actors. Ross played Mrs. Cunningham on the original TV show “Happy Days.” Kinney said he’s a bit nervous for Ross to see the show, but that all the actors have done a great job of making each part their own.

“It has to go through your head — her name’s on the theater,” Kinney said. “But with every show we’re trying for the best quality we can.”

The cast comprises many teens and has just a handful of adults. One of those adults is Diane Heaney, who plays Mrs. Cunningham in the musical. Heaney, who directs the choirs at Albert Lea High School, said many of the other actors are her students and that they’re all doing a good job.

She said she’s not nervous about playing the iconic Mrs. C role in front of Ross, but she’s also not sure how she’ll feel when Ross is actually in front of her in the audience. Heaney remembers watching the show each week with her family when it played in the 1970s and early 1980s.

All the classic characters can be found, including Mr. and Mrs. Cunningham and their children Richie and Joanie. Then there’s The Fonz, and his love interest Pinky Tuscadero. Richie’s cronies Ralph Malph, Potsie and Chachi are also present. The musical’s story is that classic Arnold’s malt shop is in danger of demolition and the gang tries to find ways to save it.