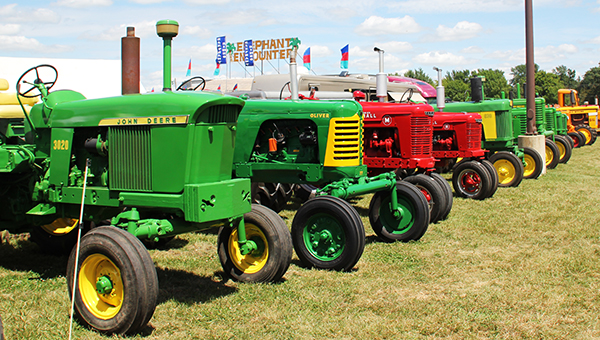 Antique John Deere and Farmall tractors are lined up at the Freeborn County Fair. Last year there were about 115 tractors on display. — Erin Murtaugh/Albert Lea Tribune

Antique tractors have become a family affair for Monty Thoms. 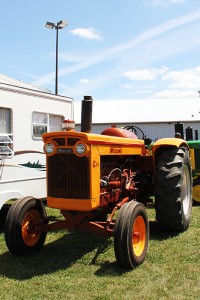 She has been in charge of the antique tractor display at the Freeborn County Fair for the past two years.

Thoms said she gets a lot of help from the tractor committee, volunteers and her family when it comes to getting everything ready for the fair. Titan Machinery is a major sponsor of the display.

Before the tractors are parked at the fairgrounds for display, Thoms and her helpers have to make sure the fencing is in place. Then they line up the tractors one by one. Members of the committee stay in campers at the display to ensure nothing happens to any of the tractors. Even though a lot of hard work is put in, they still like to have fun, she said.

“We have a little rivalry,” Thoms said.

Her father, Marvin Thompson, also has six tractors on display. 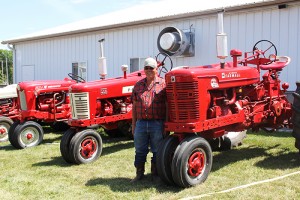 Marvin Thompson stands with his Farmall tractors. Thompson has six antique tractors on display at the fair this year. — Erin Murtaugh/Albert Lea Tribune

Although Thompson has a variety of tractors at the fair, he also has two prized possessions at home. Thompson is the owner of two 1953 Farmall tractors, originally purchased by his father and uncle. There is something special about both tractors; they have consecutive serial numbers. It is very rare for two consecutive serial numbers to be owned in the same family, let alone the same person, Thompson said.

A few of the families that help out have their personal preferences to tractor brands and enjoy giving each other a hard time over which ones are better.

The committee saw 110 to 115 tractors come to be displayed last year and are hoping for up to 125 this year, Thoms said. Tractors entered must be in mint condition including original paint and decals. A variety of manufacturers are on display, and those brands include long or short front axles. The oldest tractor on display this year is a 1935 John Deere.