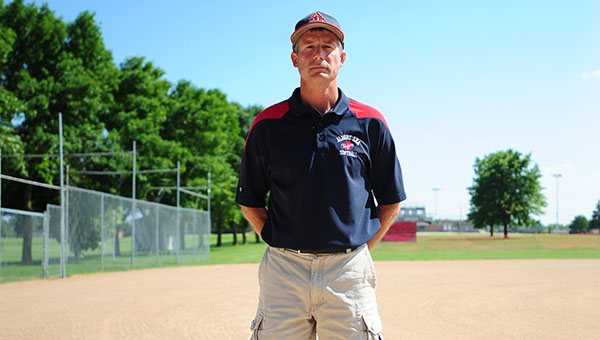 Dan Harms stands in front of the softball field at the Albert Lea Hammer Complex. Harms led the Tigers to a 7-12 record and two postseason wins. — Micah Bader/Albert Lea Tribune

Under the direction of head coach Dan Harms, the Albert Lea Lea softball team did something special. It played in four postseason games and won two of them.

Harms is the Tribune’s 2013 softball Coach of the Year.

After winning its first section game, the coaching staff agreed that it had been more than a decade since Albert Lea had accomplished that feat.

Harms finished his fourth season at the helm with a record of 7-12.

“We exceeded expectations as far as how we played at the end of the year,” Harms said. “Our goal each year has been to win at least one section game. However, we didn’t reach our goal of winning half of our games, but we were just about there.”

Albert Lea amassed a 4-2 record to start the season. After getting swept by Rochester John Marshall in a doubleheader to open the season, the Tigers got back on track by sweeping doubleheaders at Faribault and Austin.

Albert Lea continued the season on an eight-game slide, including a pair of two-run losses to Mankato Loyola and Winona and a 2-1 loss at Owatonna.

However, the Tigers showed perseverance by winning their regular-season finale 3-1 over Byron to take momentum into the Section 1AAA tournament.

“Getting the win there put us back on the winning side and helped us go into the playoffs,” Harms said. “The girls never gave up.”

In the postseason, Albert Lea shut out Austin 8-0 to get past the first round. After that opening-round win, the section tournament became double elimination with a consolation bracket. The Tigers lost to Rochester John Marshall but stayed alive with a 4-2 win over Northfield. To end the season, the Tigers lost 5-2 to Winona.

Albert Lea’s journey will be different next year, as it will play smaller schools in the postseason next year. The Tigers will drop from Class AAA to Class AA. Also in their section will be local school New Richland-Hartland-Ellendale-Geneva.

“Our expectations are going to be even higher,” he said. “Our goal for next season is to win the section, not just win a game.”

Harms said he has a staff of five coaches including junior varsity head coach Karol Hansen and ninth-grade head coach Rick Harvis along with former players.

“I’ve got a very supportive coaching staff,” he said. “We’ve got five other coaches who take a lot of pressure off of me. We all have the same philosophy that we’re always trying to improve and develop skills. That’s how we’ll stay on the winning track.