Undocumented students speak out on immigration

Undocumented high schoolers face an uphill battle when looking for jobs and education.

That’s how other students like Albert Lea High School students Uriel Lazaro and Maria Garcia feel. All came to Minnesota as small children, all have filed for the Deferred Action for Childhood Arrivals process, and all hope immigration reform will allow them to become citizens.

“I want to be the first in my family to go to college,” Lazaro said. 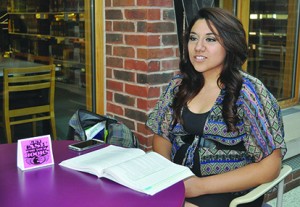 Life can be tough for undocumented high schoolers. A high school student without legal citizenship can’t find a part-time job, can’t apply for a driver’s license and can’t secure financial loans for college, which limits their opportunities.

Garcia found this out firsthand when, at 15 years old, she tried to get a job in the area.

“I decided that I wanted to work and my mom was like, ‘Oh, you can’t really work,’” she said.

Garcia and Lazaro feel the same as Austin resident Adela Valladares. Valladares’ family moved to Minnesota when she was 4 years old and she considers Austin her hometown. The 17-year-old Austin High School student used to play basketball and volleyball, and she still participates in extracurricular activities like Link Crew and Jovenes De Valor. She has many of the same dreams 17-year-olds share: She wants to get a job soon and she is already looking at colleges.

Valladares isn’t your average high school student, however. She’s an undocumented resident, one of thousands of students who applied for special status under the Deferred Action for Childhood Arrivals initiative, which grants renewable rights to defer deportation but doesn’t grant legal citizenship. Valladares is also one of the millions of undocumented residents watching the national immigration debate take place in Congress in hopes legislators create a pathway to citizenship for people already here.

Yet despite her legal status, Valladares is one of many local examples of people who are looking to become U.S. residents through immigration reform.

“Here is where I grew up,” Valladares said.

Valladares was born in Mexico City, the only child among her siblings to be born outside of the U.S. She came with her parents to California when she was 1 year old, but her family didn’t stay there long.

“Things are more expensive in California and jobs don’t pay well there,” she said.

That’s why her parents decided to come to Austin, where they got jobs at local meatpacking factories.

She knew about her citizenship status from an early age, as she overheard friends and family members discuss the latest immigration raids and who had recently been deported.

“People around town would talk about it,” she said. “[Mom] would explain to me it was because, ‘Oh, they’re not citizens, they’re not born here in the U.S., so they can’t be here unless they have a green card.’”

That’s when Valladares would ask about her legal status. Her parents gave her the same reason many undocumented residents say they want to come to the U.S.: To work toward a better life, to put their children through free public school and to give their family opportunities they never had.

Valladares doesn’t often discuss her legal status with her friends. It’s difficult for her to describe how her situation feels normal to people who can’t fathom living in another country illegally, especially because of the stigma associated with undocumented residents.

Immigration reform is among the most contentious issues federal legislators have dealt with for years, though many thought 2013 could be the year the U.S. changes its immigration policies.

Yet the House of Representatives may put off immigration reform this year, as U.S. Speaker of the House John Boehner said last month House Republicans would vote against any reform act that includes a pathway to citizenship. Representatives are expected to work out their own immigration proposal in the coming weeks.

The federal logjam on immigration comes as no surprise to local officials.

“Everybody wants to serve their own self interest, but they are not looking at the bigger picture for the country,” said Austin Mayor Tom Stiehm.

Local officials have dealt with immigration issues for years, such as the influx of Sudanese refugees to the community over the past decade or the anti-immigration rallies organized by local neo-Nazi leaders in 2009. Yet Stiehm and other local leaders say their hands are tied over responding to immigration concerns.

“We don’t know what’s going to happen and the best that anyone can do is just stay informed,” said Jeffrey Jurewicz, community organizer for Owatonna-based Centro Campesino, a Latino advocacy organization.

Jurewicz said young students should continue to apply for DACA status to create a paper trail in case legislators pass immigration reform and DACA is still open to undocumented residents.

As the immigration debate continues, more students like Valladares will likely speak up. Valladares said she decided to come forward to let others know undocumented residents had a stake in the issue as well.

“My mom told me it’s good that I can speak up for others who can’t,” she said.