AUSTIN — Fire destroyed a large shed Tuesday afternoon northwest of Austin; however, the property owner was already in the process of tearing the structure down when flames broke out. 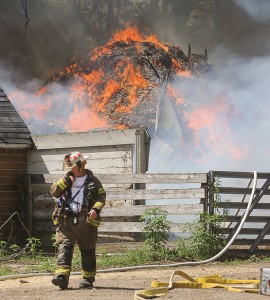 No people or animals were injured in the blaze. The shed housed no animals, but firefighters said there was hay inside of it.

Joe Sheedy was tearing down his shed at the farm about a mile northwest of Austin at 23711 513th Ave. when he suspects an ember caught the building and ignited the fire. A brush pile was smoldering on the property just west of the building, as well.

Firefighters from Austin and Brownsdale fire departments responded to the fire shortly before 3 p.m. and shuttled water from Austin to the scene well into the afternoon.