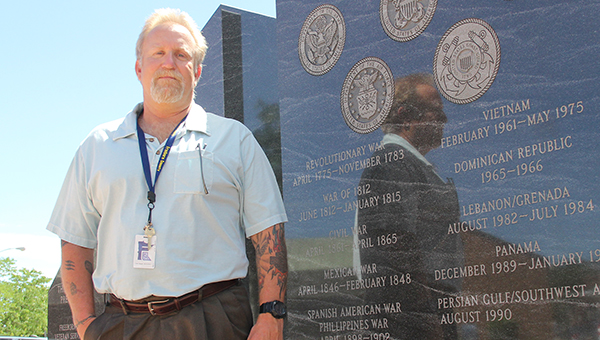 Freeborn County’s new veterans services officer Ron Reule poses for a photo outside the courthouse. Reule takes over for Jon Rhiger, who will retire Friday after more than 37 years in that position. –Kelli Lageson/Albert Lea Tribune

A North Dakota native spent years traveling the world with the Army before settling in Albert Lea a few years ago. He’s putting down roots now after taking the job of veterans services officer for Freeborn County.

Ron Reule, 54, has been training with Jon Rhiger, who will retire Friday after more than 37 years as the county’s veterans services officer. Reule said he’s looking forward to the position even if he doesn’t put in as many years as Rhiger did.

“They’re not getting 37 years out of me,” Reule said with a laugh.

Reule said he stopped in to visit Rhiger, who then told Reule he should apply for the position.

“It was happenstance,” Reule said. “I just came down to congratulate him on his retirement.”

Reule won’t have much trouble understanding veterans’ issues since he’s one himself. He retired as a sergeant major after 26 years in the Army, 18 of those years in the Special Forces, four years in a Ranger battalion and four years with the 101st Airborne Division.

In that time, he lived in Japan for four years and for one year in Korea. He was with the first Special Forces group to go into Afghanistan in 2004. Reule received a Bronze Star for a combat operation in Afghanistan and a Legion of Merit award when he retired. He also has a Master Parachutist Badge and a Combat Infantry Badge.

Of his travels, the places he enjoyed most were Nepal and Thailand. He said he was in Nepal to help the people fight Maoist insurgents.

“The people there are very kind,” Reule said. “In Thailand it’s warm, and the food is awesome.”

After 20 years in and out of Asia, he does miss it sometimes. Once in a while he will take a motorcycle trip to a Thai restaurant in Faribault. He enjoys riding his 2011 Ultra Classic Limited Harley-Davidson. In addition to trips to Sturgis, S.D., and to the Mississippi River, he said he and his wife take shorter trips around the area cruising around the cornfields of southern Minnesota. Technically he could be doing nothing but riding motorcycles since he did officially retire from the Army, but he wasn’t ready to quit working just yet.

“You’ve got to have a reason to get up in the morning,” Reule said. “This is a good reason.”

After he retired from the Army he got a job in 2006 at Hormel in Austin. He and his wife, Chris, moved with their children from Washington state. They opted for Albert Lea because they liked the town’s hockey program. They even settled into a home near the City Arena. The home was destroyed by a fire that same year. In 2007, a family tragedy changed the trajectory of his career. His 20-year-old daughter Janelle died in a car crash at the junction of U.S. Highway 69 and West Main Street, and Reule said it was a rough couple of years for his family. His most recent job was as a bus driver for five years with Albert Lea Bus Co.

“I liked it,” Reule said. “Midwestern kids are good kids.”

But the opportunity to get a job helping veterans was one that Reule would not pass up. He said he’s looking forward to being able to help local veterans. Much of his job will be helping veterans find health care either locally or with the Veterans Affairs hospital in Minneapolis. He will also do record keeping and help veterans with paperwork they need to fill out. Reule said he is also waiting curiously to see if Freeborn County is able to get a VA outpatient clinic.

“It would be good for veterans and for providing jobs in the area,” Reule said.

Another part of his job will be to stay connected with the local American Legion clubs, the Veterans of Foreign Wars group and Disabled American Veterans group to be able to offer information if there are health care changes or updates. Reule said he also wants to stay connected with the Albert Lea Beyond the Yellow Ribbon group, which helps military members and their families.

“The ability to help veterans is a good thing,” Reule said.

Interesting fact: He spent 18 years in the Special Forces “jumping out of airplanes and chasing bad guys around the world.”