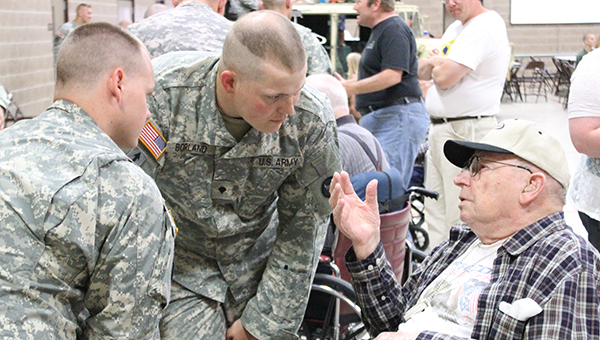 Veterans of all ages got to share stories at an open house at the Albert Lea Armory on Saturday.

The open house was from 2 to 4 p.m. It was hosted by Albert Lea’s Delta Company, part of the 2nd Battalion, 135th Infantry Regiment within the 34th “Red Bull” Division of the Minnesota National Guard. Sgt. 1st Class Jeff Dahlen said the soldiers wanted a chance to thank the community for their support. 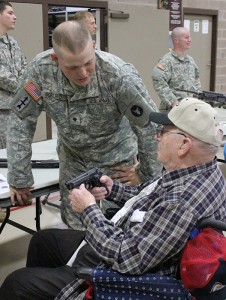 “It’s the unit’s way of being able to talk to their supporters and say thank you,” Dahlen said.

About 80 soldiers were present and were showing community members the various trucks, weapons and tools they use. A handful of veterans living at Albert Lea’s Good Samaritan Society were able to come to the open house. Recreation and Wellness Director Kate Richards said the residents enjoyed the chance to get out in the community, see the Armory and talk with soldiers.

“That’s what they’re really excited about is talking to the younger guys,” Richards said.

One resident, Joe Jensen, was talking with two soldiers and looking over all the weapons on display, including an M-4 rifle and a pistol. Spc. Travis Dahmen and Spc. Sam Borland were walking Jensen around to show him the weapons and said it was nice to talk with the older generation.

Another Good Samaritan resident, Neal Petersen, was enjoying the chance to tell soldiers his memories. Petersen was in the Army Air Force in the 1940s and was stationed in Okinawa, Japan, for part of his career.

“At that time the Air Force was a branch of the Army,” Petersen said. 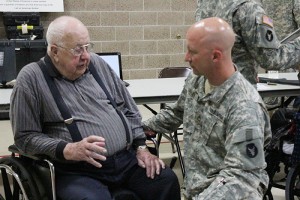 Sgt. 1st Class Jeff Dahlen listens to Neal Petersen talk about his time in the Army Air Force in the 1940s. Petersen was one of a handful of veterans who came from Good Samaritan Society to visit an open house at the Albert Lea Armory on Saturday.

He recalled living in tents and working in a repair unit. He also remembers coming home first to Seattle, and then riding a train back to Fort McCoy in Wisconsin. He had never been to the Armory, at 410 Prospect Ave., but said he did remember when the Armory was located on Clark Street.

Albert Lean Russell Olson also remembers the old location of the Armory. He spent about 9 years in Albert Lea’s National Guard unit back in the 1960s. On Saturday, he was impressed with the trucks on display and said it was fun to see the changes since his time in the Army.

“I wanted to come out and see what it was like,” Olson said.

Tom Sosebee Jr. brought his dad, Tom, 81, to the open house on Saturday. Sosebee said he was in the Army and his dad was in the Air Force. Sosebee also has two brothers who were in the Army. He and his dad took a photo next to a small statue of military boots, a rifle and a helmet. The statue is available for people to use at veteran funerals, and Sosebee said people just have to contact the staff at the Armory to be able to use it. Sosebee said he wanted to bring his dad to the event so they could take some photos and see the new equipment soldiers use.

Following the open house the Albert Lea Beyond the Yellow Ribbon group held its second annual Freedom Festival at the Armory.