Funeral services for Victor Irvin Glantz will be at 11 a.m. Wednesday at Central Freeborn Lutheran Church in Albert Lea. The Rev. Greg Ofsdahl will officiate. Interment will be in the East Freeborn Cemetery. Military honors will be accorded by Albert Lea veterans organizations. Visitation will be from 4 to 7 p.m. Tuesday at Bonnerup Funeral Service in Albert Lea, as well as one hour prior to the service at church. 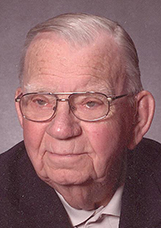 Victor was born on July 25, 1923, to Victor and Ida (Bagley) Glantz in Albert Lea. He graduated from Albert Lea High School and remained a life-long resident of the area. From December 1942 to January 1946 he was proudly enlisted in the U.S. Army Air Corps. He served in the southwest Pacific as an intelligence specialist preparing information for B29 bombing missions on Japan. In 1946, after returning to Albert Lea from the service, he married Lila Johnsrud at the East Freeborn Church. Together they raised two daughters.

Victor was baptized, confirmed and married at East Freeborn Lutheran Church and later became a member of Central Freeborn Lutheran Church where he was active in Lutheran Brotherhood, church council and choir. In 1946 he took over the Bancroft General Store in Albert Lea, which had been in his family since 1916. In 1957 he joined the Albert Lea Post Office and eventually became a rural mail carrier for 33 years before retirement.

Victor was a member of the American Legion, VFW, Elks, Sons of Norway and the National Associations of Retired Federal Employees and Rural Letter Carriers. He enjoyed golfing, fishing, hunting, camping and traveling. He especially enjoyed spending time with friends, family and his grandchildren.

He is preceded in death by his parents; wife, Lila Glantz; and sister, Shirley Talle.