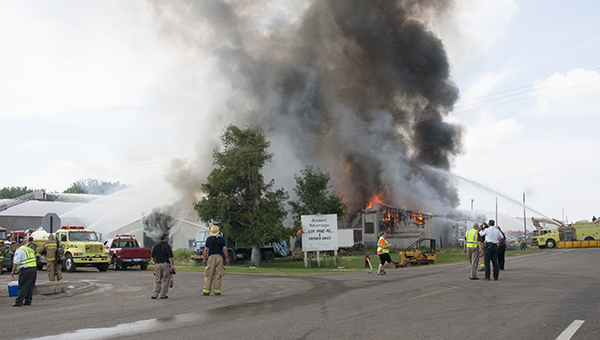 Firefighters from more than a dozen fire departments in and around Freeborn County responded to the blaze Monday afternoon at 101 Netherlands Ave. W. in Hollandale. — Sarah Stultz/Albert Lea Tribune

HOLLANDALE — For more than eight hours Monday firefighters from at least 20 area fire departments battled a blaze that destroyed three warehouses in this community.

At least one firefighter was treated for heat exhaustion.

Two of the three warehouses stored antique vehicles — including Ford Model T and Model A cars and trucks — under the business name of Jones Storage, and the third warehouse was rented out for a motorcycle parts business. The warehouses, at 101 Netherlands Ave. W., were owned by Donald and Irene Jones.

“That building right there is the history of Hollandale,” said Jon Stout, brother-in-law of Irene Jones.

Stout said the warehouses used to be part of a potato company owned by Paul D. Jones for many years. Before that, they were part of a lumber yard.

Mike Alvey, who stopped by his father’s home about a block away and then saw the blaze, said he worked at the potato company for eight years helping to grow potatoes and onions. His father worked as a potato salesman.

“I’ve seen fires, but never anything like this,” Alvey said. “A lot of people have been employed by this place.”

The Joneses have owned the property for at least 15 years, said Stout and his wife, Gertie.

The blaze drew the attention of dozens of Hollandale residents, who could be seen standing and watching within a few blocks, many taking photographs with their cellphones. The smoke could be seen for miles. The fire was at its highest around 2 p.m.

Freeborn County Emergency Management Director Rich Hall said the call of the fire came into dispatchers around noon. At that time, only one structure was engulfed.

He said on average each tanker carries 2,000 gallons of water, and pumpers can go through 1,000 gallons in a single minute.

Within a few hours, more than a dozen fire departments were at the scene to assist, not only with water but in manpower because of high temperatures and humidity.

The Albert Lea Salvation Army also set up a cooling station to offer water and food to firefighters as they rotated shifts.

Firefighters were at the scene until 8:30 p.m., said Freeborn County detective Chuck Malepsy.

Residents in the block surrounding the warehouses were advised of a potential evacuation, said resident Janice Jensen, who lives five houses down Netherlands Avenue. She said she packed up her medicines and important papers as a precaution.

Jensen and others expressed concern about nearby Thompson Oil Co. and the potential for oil tanks next to the business to catch fire.

The fire did not cross the street to reach the oil company.

Hall said the State Fire Marshal’s Office has been called in to investigate the cause of the fire, which is unknown at this time.

The buildings were a total loss.