Sara Cwiakala and Luke Klingson of Savage were married at 4 p.m. June 14, 2013, at Legends Golf Club in Prior Lake. 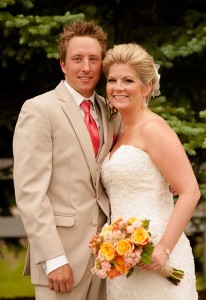 The bride is the daughter of Bruce and Marcee Cwiakala of Westville, Ind. Grandparents are the late Edward and Angie Dickinson and the late Frank and Rita Cwiakala of Chesterton, Ind.

The groom is the son of Gary and Lori Klingson of Glenville. Grandparents are Bob and JoAnne Kluender of Myrtle and Alfred and the late Ardis Klingson of Callender, Iowa.

The bride is a 2001 graduate of Chesterton High School and a 2007 graduate of Purdue University North Central. She is employed at Pernod Ricard USA.

The groom is a 2006 graduate of Glenville-Emmons High School and a 2009 graduate of Minnesota School of Business. He is employed at the Luther Volkswagen dealership in Burnsville.

A reception was held at Legends Golf Club. The Tim Sigler Band performed a private concert for the reception and first dance of the bride and groom.

The couple will honeymoon this winter.