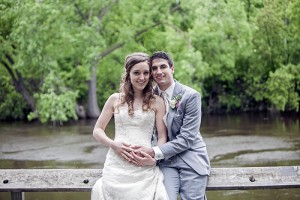 The bride’s parents are Roger G. Johnson and Pauline Johnson of Albert Lea. Grandparents are the late Chester E. and Harriet Johnson, the late Philip N. and Dora Johnson and Fern Johnson.

The flower girl was Zoe Kaehler, cousin of the bride and daughter of Rhianna and William Kaehler of Lakeville.

Ring bearer was Zane Kaehler, cousin of the bride and daughter of Rhianna and William Kaehler of Lakeville.

The host and hostess were Donald and Nancy Carson of Alden, friends of the bride.

The florist was Myra Pehoski, friend of the bride.

The groom is a 2008 graduate of West High School in Appleton, Wis., and a 2011 graduate of Carlson School of Management with a Bachelor of Science degree. He is employed as a financial adviser at ING in Minneapolis.

A reception given by Donald and Ruth Schmidt, cousin of the bride’s family, was held June 23 at Our Father’s House.

A reception is planned in Appleton for July 13.

After a trip to Vieques, Puerto Rico, the couple will reside in Minneapolis.