Brianna Joy Tufte and Nicholas Andrew Masching of Hayfield were married at 3 p.m. June 15, 2013, at Trinity Lutheran Church in Hayfield. 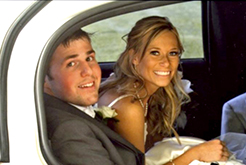 The groom’s parents are Scott and Jane Masching of Hayfield. Grandparents are John and Ardy Brennan of Rochester and the late Norbert and Velma Masching.

The maid of honor was Madison Tufte of Anthem, Ariz., sister of the bride. Bridesmaids were Kristina and Rachel Masching of Hayfield, sisters of the bride, and Jenna Sager of Sioux Falls, S.D., friend of the bride.

The flower girls were Lily Heichel, daughter of Kris Heichel and Riley Schwietz, daughter of John and Becki Schwietz.

The best man was Jared Franke of Hayfield, friend of the couple. The groomsmen were Paul Blanchard and Tyler Stroebel of Hayfield and Nick Tufte of Anthem, brother of the bride.

Ushers were Cody Hendrickson and Caleb Faulhaber, friends of the couple.

The organist was Nancy Matti.

Becki Schwietz was the reader. Alyssa Sager was the personal attendant.

The bride is a 2009 graduate of Hayfield High School and a graduate of Riverland Community College with a degree in health unit coordinating and medical secretary. She will intern at Alina Medical in Owatonna.

The groom is a 2009 graduate of Hayfield High School. He has a hog operation and farms.

After a trip to Maui, Hawaii, the couple will reside in Hayfield.