A 19-year-old Albert Lea man is facing a charge of second-degree assault for allegedly assaulting two other men with a crowbar Wednesday night. 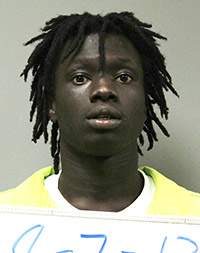 James Dak Both, 23, and Lul Dak Chak, 21, also of Albert Lea, have also been charged with fifth-degree assault for allegedly punching one of the men.

One of the two men who were assaulted reportedly told police that they were seated outside when the three men approached them and one of them threw a rock. Court records state Joak allegedly walked up to the alleged victims with his hands behind his back before showing them a crowbar and then swinging it at both of the victims.

He reportedly struck one of the men on the back at least twice. The same victim was reportedly also punched by all three men. Police have stated the man who was struck with the crowbar was taken to Mayo Clinic Health System in Albert Lea for injuries.

Albert Lea police previously stated they were able to locate and arrest the three men with help from residents who called in suspicious behavior.

Freeborn County District Court Judge Steve Schwab ordered Joak’s unconditional bail be set at $25,000 and his conditional bail at $2,500. His next court appearance is slated for Aug. 22.

Both and Chak were released on their promise to appear at their next court hearing.